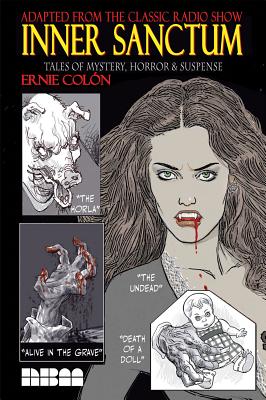 The Inner Sanctum is one of the most fondly remembered mystery and horror radio shows from the 1940s--it is brought to life here with striking illustrations that re-create four chilling tales. In "The Horla," a man is haunted by a mysterious, grotesque being that only he can see. At first, the being seeks to enslave the man, but in the end it turns out the being is actually out to destroy him. "Death of a Doll" tells the tale of a reporter who is investigating the identity and death of an unidentified female corpse. Throughout his investigation, he carries her doll with him and, instead of "mama," the doll continually cries out "Kara Nana," another name for the devil. "The Undead" follows a young woman as she discovers a 10-year-old obituary for her living husband. Terrified, she goes to his tomb to investigate. The last story in the collection, "Alive in the Grave," follows a man who may have unwittingly consigned another man to being buried alive.

"[Colón] can scare the pants off you. I highly recommend Inner Sanctum, which ought to come with a reinforced belt." —Minneapolis Star Tribune (January 19, 2012)

"The energy Colón infuses into them makes them constitute something more enjoyable than a pop-cultural trip down memory lane." —www.BooklistOnline.com

"Colón succeeds in respecting the original tales, his readers, and the joy of getting slightly creeped out." —www.SchoolLibraryJournal.com

Ernie Colon is a comic artist who has worked for such companies as Broadway Comics, DC, Eclipse, Harvey Publications, Marvel, and Star Comics. He is the cocreator of The 9/11 Report: A Graphic Adaptation, After 9/11: America's War on Terror (2001-), Anne Frank: The Anne Frank House Authorized Graphic Biography, Che: A Graphic Biography, and Vlad the Impaler. He lives in Huntington, New York.
Loading...
or
Not Currently Available for Direct Purchase