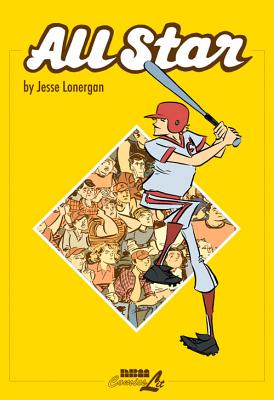 Winner of:
2015 ALA Great Graphic Novels for Teens

As the summer of 1998 nears, Mark McGwire and Sammy Sosa are racing each other to break the home-run record, Bill Clinton is being questioned about a certain Monica Lewinsky, Semisonic’s “Closing Time” is top of the charts, and Carl Carter is leading the Elizabeth Monarchs of rural Vermont to the state championship his senior year. The world is Carl’s oyster: a full scholarship to the University of Maine awaits, going pro after college isn’t out of the question, and he’s so good he can do whatever he wants—until, that is, he makes one very arrogant mistake. Acclaimed graphic novelist Jesse Lonergan offers readers a thought-provoking exploration of the fleeting highs of success in this engrossing book.

Praise For All Star…

". . . . an authentic look and feel with spare, yet effective contours and relatable characters and problems." —Matt White, Publishers Weekly

“This is a wonderfully well-rounded, character-driven story about fairness and self-interest. Lonergan’s black inking and colorless illustrations seem simple but are packed with raw emotion that’s evident in every face and expression. This is an amazing book that both teens and adults will love—definitely a home run.” —Peter Blenski, Booklist

"References to Mark McGwire, President Clinton, and Monica Lewinsky explore society at the time and provide a backdrop for Carl’s confusion. The b&w illustrations are simple and appealing, often focusing on characters’ faces to express the tone. Some sexual references and mature situations make this a choice for older teens [...] Recommended." —Elizabeth Andersen, Library Media Connection

Jesse Lonergan is the author of the graphic novels Flower & Fade, which chronicles a relationship gone wrong, and Joe & Azat, based on his tour with the Peace Corps in Turkmenistan. An ESL teacher, he lives in the Boston area.