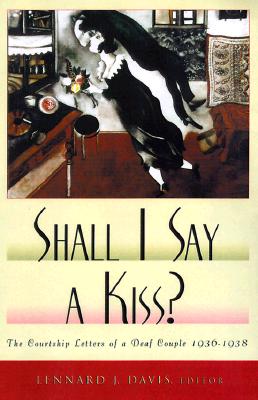 Shall I Say A Kiss?

Upon the death of his father Morris at age 82, Lennard Davis found among his effects a trove of letters, kept in careful chronological order, that dated from 1936. The letters ended in 1938, when Eva Weintrobe came to America to marry Morris, and they provide the core of Shall I Say A Kiss?, their courtship by correspondence. In his framing comments, Davis speculates that his parents met perhaps four or five times before they wed, a fact that heightens the importance of these letters to their fate. Davis illustrates vast contrasts between Morris and Eva, both to each other (Morris was 38; Eva was 26), and to themselves in later life as witnessed by their son. Where Davis saw his father brimming with confidence and a sense of superior intellect while his mother acted as the reserved, dutiful wife, he was startled to learn through their letters that she could be the shrewd questioning correspondent even as his father wrote as an unsure, imploring suitor.

Shall I Say A Kiss? opens a window into the lives of two working-class, Jewish, British, Deaf people in the 1930s. This striking book reveals a consistent, journal-like account of the “lived” experience of Deaf people during the tumultuous times just prior to World War II. Because the correspondence is mainly composed of Eva’s letters, the focus sharpens even further as a record of the life and opinions of a young, working-class, Deaf woman about to embark upon marriage and life in a new country. The challenges she faced, including de facto racial barriers for both deaf and Jewish immigrants, and the prospect of uniting with a man she knew mostly through his letters alone, make for a compelling and emotional trip through her life. Shall I Say A Kiss? serves as a singular social document and also as an engaging and often moving narrative that will win audiences among academics and romantics alike.