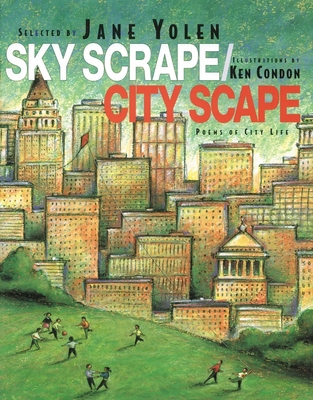 All the jump-roping, rollerskating, skyscraping excitement of city life is packed into this pulsating collection of poems selected by Jane Yolen. Poems by Langston Hughes, Jane Yolen, Rachel Field, and others capture the rush and rumble, toss and tumble of taxis and trains, pigeons and parks, sidewalks, and street cleaners. Ken Condon's bold illustrations evoke the gritty passion of the urban scene. Young readers will delight in this irresistible anthology that crackles with energy and zest.

Jane Yolen has been called the Hans Christian Andersen of America and the Aesop of the twentieth century. Her many awards include both the Kerlan Award and the Regina Medal for the body of her work. She lives in Hatfield, Massachusetts, and St. Andrews, Scotland. janeyolen.com.

Ken Condon, whose illustrations have been published in many different magazines and corporate publications, is the illustrator of three children's books: Sky Scrape/City Scape: Poems of City Life, selected by Jane Yolen; When a City Leans Against the Sky by Allan A. De Fina; and America, My New Home by Monica Gunning. He lives in western Massachusetts with his wife, daughter, and two kitties.
Loading...
or
Not Currently Available for Direct Purchase