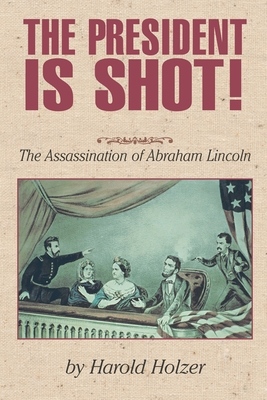 The President is Shot! (Hardcover)

The Assassination of Abraham Lincoln

On Friday evening, April 14, 1865, less than a week after the surrender of Confederate forces, John Wilkes Booth crept into Ford's Theatre and murdered Abraham Lincoln. Though it happened nearly 150 years ago, no one has been sure why it happened. In this riveting book, Harold Holzer, one of the country's leading authorities on Lincoln, sweeps away the fog of history to answer the questions surrounding Lincoln's assassination. He shows the conditions of the time that led to the tragic event at Ford's Theatre, and why those who hated Lincoln, such as John Wilkes Booth, sought such horrifying revenge. Filled with dramatic detail and illustrated with archival photographs, this book is bound to be considered an essential work for young readers.

Harold Holzer, Vice President for Communications and Marketing at the Metropolitan Museum of Art, is one of the country's leading authorities on the political culture of the Civil Ware era. he has authored, coauthored, and edited twenty books about Lincoln and the Civil War, including Abraham Lincoln the Writer. Mr. Holzer is cochairman of the United States Lincoln Bicentennial Commission. He lives in Rye, New York.

Praise For The President is Shot!: The Assassination of Abraham Lincoln…

"A page-turner of a text, a fascinating array of photos and archival illustrations. ..." &#8212;Booklist, starred review

"Holzer neatly weaves a huge amount of information into this fascinating story, a page-turner for history buffs. A superb addition to the field." &#8212;Kirkus Reviews, starred review
or
Not Currently Available for Direct Purchase
Copyright © 2020 American Booksellers Association