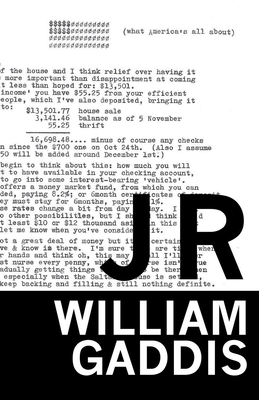 A great masterpiece by William Gaddis, with a new introduction by Rick Moody.

Winner of the 1976 National Book Award, J R is a biting satire about the many ways in which capitalism twists the American spirit into something more dangerous, yet pervasive and unassailable. At the center of the novel is a hilarious eleven year old--J R--who with boyish enthusiasm turns a few basic lessons in capitalist principles, coupled with a young boy's lack of conscience, into a massive and exploitative paper empire. The result is one of the funniest and most disturbing stories ever told about the corruption of the American dream.

William Gaddis (1922-1998) stands among the greatest American writers of the twentieth century. The winner of two National Book Awards, as well as a MacArthur Genius Award, a Lannan Lifetime Achievement Award, and grants from the Guggenheim Foundation and the National Endowment for the Arts, he wrote five novels during his lifetime. He is loved and admired for his stylistic innovations, his unforgettable characters, his pervasive humor, and the breadth of his intellect and vision.
or
Not Currently Available for Direct Purchase
Copyright © 2020 American Booksellers Association