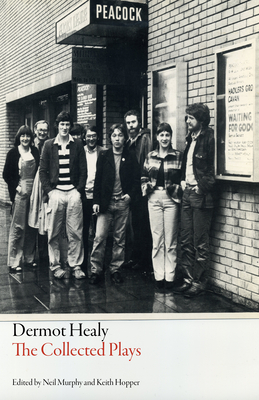 Although Dermot Healy (1947-2014) is probably best known as an award-winning novelist and poet, he was also a prolific playwright, screenwriter, and actor. Healy's interest in drama was long-standing, and was central to his development as a writer. Between 1985 and 2010 he wrote thirteen stage plays, including a critically-acclaimed adaptation of Garcia Lorca's

Blood Wedding in 1989. All of these plays are published here for the first time. One of the most striking features of Healy's dramatic works is their spirit of community collaboration and their strong social conscience. His first play,

Here and There and

Going to America (1985), was performed by members of the Sligo Dole Q Company; Metagama (2004) was written for Theatre Hebrides on the Isle of Lewis;

Serious (2005) was written in collaboration with (and performed by) prisoners from Castlerea Prison;

A Night at the Disco (2006) was written in collaboration with the teachers and students of St Mary's Secondary School in Ballina. These community-based productions were interspersed with more professional commissions, including Mr Staines, performed by Pan Pan Theatre Company at the Samuel Beckett Theatre in Dublin in 1999, and

Men to the Right,

Women to the Left, first performed at The Abbey Theatre in 2005 by the Clones Drama Group.

Although the settings of Healy's plays are often local and regional by design, their reach is always international and universal. With the publication of this volume, Healy's contribution to drama seems certain to flourish amongst practitioners and scholars alike, and

The Collected Plays will be of great interest to all devotees of contemporary Irish theatre.