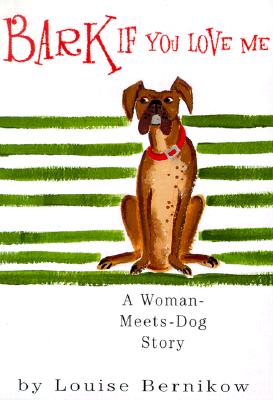 Bark If You Love Me

As a single woman living in the city, Louise Bernikow relished her independence. Then a brown boxer with amber eyes unexpectedly came into her life and taught her a few lessons about love and companionship.

At first, they're not the perfect match. She's never had a pet and knows nothing about dogs. He's got a gimpy leg and a mysterious past. They first meet in the park: he, hunched down in the backseat of a police car; she, jogging and minding her own business. But when she sees a crowd around the police car, she stops and sees a scrawny dog with big eyes gazing up at her. He needs a home, she's told. Never mind that she lives in a small fourth-floor walk-up apartment. Never mind that she's been told she's allergic to all animals. She takes him in.

With wit and heart, Bernikow chronicles their first bumpy year together--in which both dog and woman become part of the neighborhood's eccentric community of dog people. And she discovers, just as her sister-in-law predicts, that a dog is a good way to meet people (that is, men). But in the end, she realizes that she's already met Mr. Right. BARK IF YOU LOVE ME is the uproariously funny and moving story of a woman, a dog, and how they manage to find their way into each other's hearts.

Louise Bernikow is the author of six books, including Among Women and The Shoulders We Stand On: The American Woman's Almanac. She has written articles for such publications as the New York Times, Playboy, Ms., Cosmopolitan, and Esquire. A frequent guest lecturer on women's issues at colleges throughout the country, Louise Bernikow lives in New York City with her dog, Libro.
or
Not Currently Available for Direct Purchase