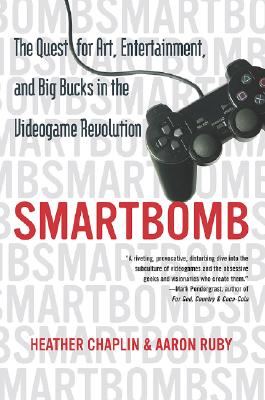 The Quest for Art, Entertainment, and Big Bucks in the Videogame Revolution

What started as a game of Pong, with little blips dancing across a computer screen, has evolved into a multi-billion-dollar industry that is changing the future, making inroads into virtually all aspects of our culture.Who are the minds behind this revolution? How did it happen? Where is it headed?

In Smartbomb, journalists Heather Chaplin and Aaron Ruby take the reader behind the scenes at gaming conventions, into powerhouse think tanks where new games are created, into the thick of the competition at cyberathlete tournaments, and into the homes of gamers for whom playing a role in a virtual world has assumed more relevance and reality than life in the real world.

Heather Chaplin is a journalist who has written for many major publications, including the New York Times, Fortune, and Salon. She lives in New York City. This is her first book.

Aaron Ruby has written extensively about the videogame industry and has reviewed videogames for Entertainment Weekly. He lives in New York City. This is his first book.

Praise For Smartbomb: The Quest for Art, Entertainment, and Big Bucks in the Videogame Revolution…

“The entertaining and vivid Smartbomb brings video games to life in all their bewildering, provocative, and disturbing forms.” — The Boston Globe
or
Not Currently Available for Direct Purchase
Copyright © 2020 American Booksellers Association