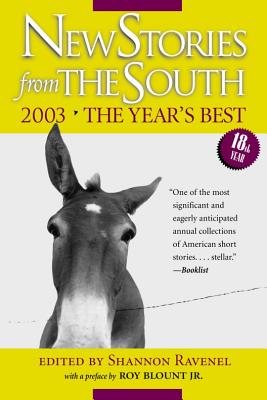 New Stories from the South 2003

Many famous writers later (James Lee Burke, Barbara Kingsolver, Larry Brown, Tony Earley, William Gay), Ravenel still combs through over one hundred journals and magazines, regional and national, large and small, in search of the most talented authors coming out of the South. She still tracks down the newest voices before their breakouts, collecting the best renditions of the short-story genre. New Stories from the South has become sine qua non in creative-writing classes, in Southern-literature classes, for any serious writer following the competition, and above all, for any lover of Southern literature.

The stories in the eighteenth volume of NEW STORIES FROM THE SOUTH carry on that tradition. Among the eighteen writers making their mark in this year's volume are Michael Knight, Donald Hays, John Dufresne, ZZ Packer, and Chris Offutt. This year's preface is by the preeminent Southern humorist and NPR regular Roy Blount, Jr.

Each story is followed by the author's note about its origin. Readers will also find an updated list of magazines consulted by the editor, and a complete list of all the stories selected each year since the series' inception.

ROY BLOUNT JR. is the author of 19 previous books, most recently Feet on the Street: Rambles Around New Orleans. He is a panelist on NPR's Wait Wait...Don't Tell Me, a columnist for Oxford American, a contributing editor to The Atlantic Monthly, and president of the Authors Guild. TIME puts him squarely "in the tradition of the great curmudgeons like H.L. Mencken and W.C. Fields." He lives in western Massachusetts.