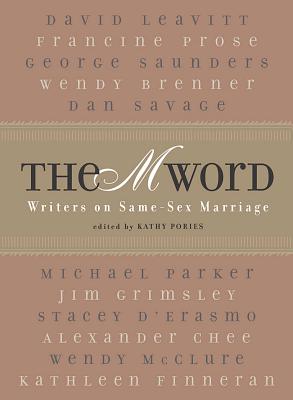 As it heads through the courts, dividing the nation and shaping the political landscape, the issue of same-sex marriage is becoming one of the major civil-rights battles of our generation. Now, some of the country's finest writers, gay and straight, explore the nuances of one of the most complicated issues of our time.

Drawing on personal experiences or culling from history, the headlines, or their own fertile imaginations, eleven noted writers present an all-too-human look at gay matrimony and its implications for marriage in general—and how our traditional marriages both influence and measure up to these new unions.

With essays by Francine Prose, on what would have happened if Oscar Wilde had married his lover; George Saunders, on the need to outlaw not only same-sex marriages but also samish-sex marriages; Dan Savage, on the supposed value of monogamy within marriage; Wendy Brenner, on giving her best friend away in a gay marriage; and many others. The M Word reminds us that marriage of any sort is an institution now ready for reexamination.

Kathy Pories earned her B.A. and Ph.D. in English Literature at the University of North Carolina at Chapel Hill. She taught in the English Department at UNC and at Elon University before joining Algonquin in 1995. She lives in Durham, North Carolina.
Loading...
or support indie stores by buying on