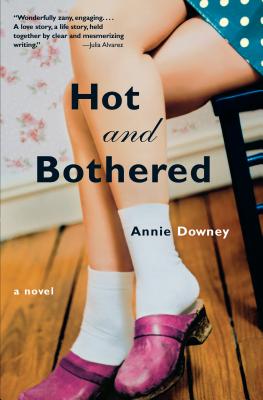 She’s offbeat, off balance, and at times off-the-wall, a late-thirties mother of two living in Cambridge, Massachusetts, and trying to figure out who she is now that her husband has left her. He’s a rat, anyway, and currently attends Sex Addicts Anonymous. He still comes by the house, though, as do her hippie, macrobiotic mother; her feisty, alcoholic best friend; her God-fearing grandmother; and that Perfect Guy, the one with the beatific son who plays with her daughter, the one who happens to have a winning smile, wild black hair, a professorship at Harvard—and (drats!) a gorgeous doctor girlfriend.

Told in short takes that perfectly mimic the frantic nature of our busy lives, Hot and Bothered follows its heroine through the streets of Cambridge, where she spends far too much time staring into space and sipping mocha lattes with extra whipped cream; to church, where she prays for a little salvation; to Alaska, where she believes a rugged outdoorsman might just be that salvation; and to Cape Cod, where, in a little house by the sea, she might finally see the light. Annie Downey has written an updated Cinderella story for all single moms.

Annie Downey is a regular contributor to Hip Mama and Vermont Woman. Her work has appeared in Harper’s magazine and the Utne Reader, as well as on NPR. She lives in rural Vermont.
Loading...
or support indie stores by buying on