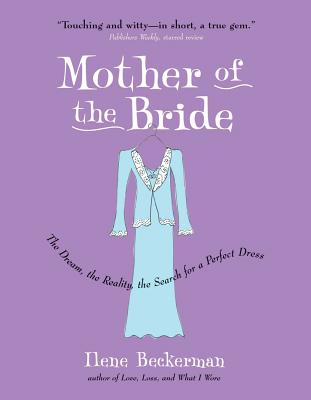 Mother of the Bride

The Dream, the Reality, the Search for a Perfect Dress

“An account that is sweetly sentimental and brutally honest, touching and witty—in short, a true gem.” —Publishers Weekly, starred review

“A work that adds great luster to an already golden event.” — The Memphis Commercial Appeal

“Her prose is spare, but rich with meaning and always very honest.” — The Cleveland Plain Dealer

The relationship between a mother and daughter is often fraught— but never so much as during the preparations for that walk down the aisle. Ilene Beckerman has taken that walk with three daughters and tells us—with great wisdom and wit—why childbirth is less painful than planning a wedding.

Ilene Beckerman was nearly sixty when she began her writing career. Her articles have appeared in the New York Times, the Los Angeles Times, and Ladies’ Home Journal. She has judged People's "Best and Worst Dressed" issue and has traveled the country, speaking to women's groups. “Sometimes,” she says, “i feel like Grandma Moses—she didn’t start until later in life either—but i try not to look like her.”
Loading...
or
Not Currently Available for Direct Purchase