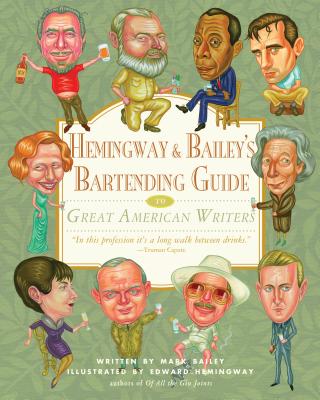 In this entertaining homage to the golden age of the cocktail, illustrator Edward Hemingway and writer Mark Bailey present the best (and thirstiest) American writers, their favorite cocktails, true stories of their saucy escapades, and intoxicating excerpts from their literary works. It’s the perfect blend of classic cocktail recipes, literary history, and tales of the good old days of extravagant Martini lunches and delicious excess.

When Algonquin Round Table legend Robert Benchley was asked if he knew that drinking was a slow death, Benchley took a sip of his cocktail and replied, “So who’s in a hurry?” Hunter S. Thompson took Muhammad Ali’s health tip to eat grapefruit every day; he just added liquor to the mix. Invited to a “come as you are” party, F. Scott Fitzgerald and his wife, Zelda, arrived in their pajamas ready for their cocktail of choice: a Gin Rickey.

"You'll be convinced that a writer's soul resides not in the heart or mind, but in the liver."
—Dallas Morning News