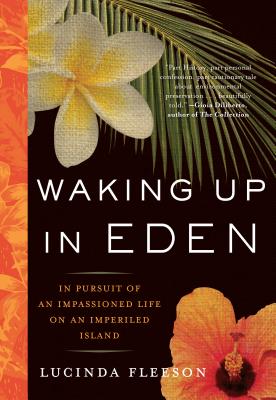 Waking Up in Eden

In Pursuit of an Impassioned Life on an Imperiled Island

“Middle-aged, divorced, and disillusioned with her career, Lucinda Fleeson wonders if passion and adventure are gone for good. Then, she is offered a job at the National Tropical Botanical Garden in Hawaii. Fleeson dives into Hawaiian botany and history, restoring a plantation cottage and exploring the gardens. With deft, vivid prose, she describes her own awakening to new life and passion.”
— Andrea Kaitany, Schuler Books & Music, Okemos, MI
View the List

Like so many of us, Lucinda Fleeson wanted to escape what had become a routine life. So, she quit her big-city job, sold her suburban house, and moved halfway across the world to the island of Kauai to work at the National Tropical Botanical Garden. Imagine a one-hundred-acre garden estate nestled amid ocean cliffs, rain forests, and secluded coves. Exotic and beautiful, yes, but as Fleeson awakens to this sensual world, exploring the island's food, beaches, and history, she encounters an endangered paradise—the Hawaii we don't see in the tourist brochures.

Native plants are dying at an astonishing rate—Hawaii is called the Extinction Capital of the World—and invasive species (plants, animals, and humans) have imperiled this Garden of Eden. Fleeson accompanies a plant hunter into the rain forest to find the last of a dying species, descends into limestone caves with a paleontologist who deconstructs island history through fossil life, and shadows a botanical pioneer who propagates rare seeds, hoping to reclaim the landscape. Her grown-up adventure is a reminder of the value of choosing passion over security, individuality over convention, and the pressing need to protect the earth. And as she witnesses the island's plant renewal efforts, she sees her own life blossom again.

Praise For Waking Up in Eden: In Pursuit of an Impassioned Life on an Imperiled Island…

"Fleeson’s descriptive talents come to the fore as she summons the pungent dilapidation of her surroundings and the drama of the landscape . . . A surviving-middle-age story that artfully blends the intriguing world of natural science with the theater of human foibles."—Kirkus Reviews

Lucinda Fleeson is director of the Hubert Humphrey Fellowship Program at the Philip Merrill College of Journalism at the University of Maryland. She was a reporter at the Philadelphia Inquirer for many years and has been awarded an Arthur Rouse Award for Press Criticism, a McGee Journalism Fellowship in Southern Africa, a Knight International Press Fellowship, and a Nieman Fellowship at Harvard. Before settling in Washington DC, she lived in Philadelphia, Boston, New York, Budapest, Botswana, and, most notably, Kauai.