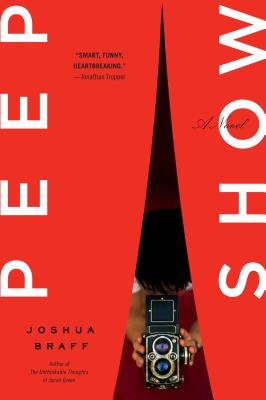 Peep Show is the bittersweet story of a young man torn between a mother trying to erase her past and a father struggling to maintain his dignity in a less-than-savory business. As David peeps through the spaces in the screen that divides the men and the women in Hasidic homes, we can’t help but think of his father’s Imperial Theatre, where other men are looking at other women through the peepholes.

As entertaining as it is moving, Peep Show looks at the elaborate ensembles, rituals, assumed names, and fierce loyalties of two secret worlds, stripping away the curtains of both.

"Braff skillfully illuminates the failures and charms of a broken family . . . Haunts long after the final page."

"Although Peep Show could be a heavy-handed family drama, Braff chooses to keep the story light, sketching several funny but poignant scenes . . . The comic thrust, however, never detracts from the novel's intimate peek into a divided family." --BookPage

Joshua Braff the author of The Unthinkable Thoughts of Jacob Green, lives in California with his wife and two children.
Loading...
or support indie stores by buying on