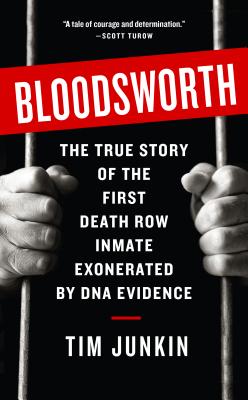 The True Story of One Man's Triumph over Injustice

“Chilling, heartbreaking, and ultimately inspiring. I urge you to read it.”
—SISTER HELEN PREJEAN, author of Dead Man Walking

CHARGED WITH THE RAPE AND MURDER of a nine-year-old girl in 1984, Kirk Bloodsworth was tried, convicted, and sentenced to die in Maryland’s gas chamber. Maintaining his innocence, he read everything on criminal law available in the prison library and persuaded a new lawyer to petition for the then-innovative DNA testing. After nine years in one of the harshest prisons in America, Kirk Bloodsworth became the first death row inmate exonerated by DNA evidence. He was pardoned by the governor of Maryland and has gone on to become a tireless spokesman against capital punishment. Bloodsworth’s story speaks for 159 others who were wrongly convicted and have since been released, and for the thousands still in prison waiting for DNA testing.

“The reader will be swept along to an amazing and shocking conclusion that could never be believed as fiction.” —JOSEPH WAMBAUGH, author of The New Centurions

“Unbroken by the horror and anguish of his ordeal, [Kirk Bloodsworth] has now dedicated himself to saving other innocents from the living hell he endured.” —SENATOR PATRICK LEAHY, ranking member of the Senate Judiciary Committee


Praise For Bloodsworth: The True Story of One Man's Triumph over Injustice…

"Kirk Bloodsworth is an American Josef K., an icon of a system that failed him—and justice—at every turn."
—Washington Post Book World

Tim Junkin is a lawyer and an award-winning novelist who lives in Maryland.
Loading...
or support indie stores by buying on