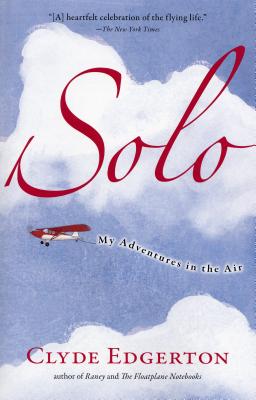 My Adventures in the Air

When Clyde Edgerton was four years old, his mother took him to the local airport to see the planes. For Edgerton, it was love at first sight. Eighteen years later, she would take him to the same airport to catch a flight to Texas for Air Force pilot training. In Solo, Edgerton tells the story of his lifelong love affair with flying, from his childlike wonder to his job as a fighter pilot flying reconnaissance over the Ho Chi Minh Trail. Now, nearly thirty-five years after the war in Vietnam, he looks back at his youthful passion for flying, at the joy he took in mastering it, at the exhilaration—and lingering anguish—of combat flying. It is a story told with empathy and humor—and with searing honesty that will resonate with every pilot who remembers the first takeoff, the first landing, the first solo. For the nonpilots who always choose the window seat, it’s a thrilling story to live vicariously.

Praise For Solo: My Adventures in the Air…

“[A] spare, heartfelt celebration of the flying life.” — The New York Times

Clyde Edgerton is the author of eight novels, five of which have been New York Times Notables. He is a professor of creative writing at the University of North Carolina at Wilmington and performs with his band, Rank Strangers. Author Web site—www.clydeedgerton.com.
Loading...
or support indie stores by buying on