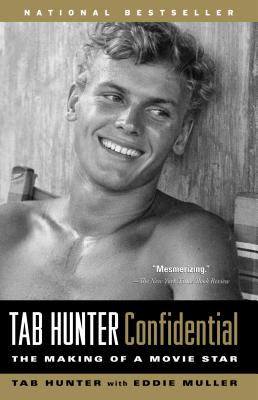 The Making of a Movie Star

Welcome to Hollywood, circa 1950, the end of the Golden Age. A remarkably handsome young boy, still a teenager, gets "discovered" by a big-time movie agent. Because when he takes his shirt off young hearts beat faster, because he is the picture of innocence and trust and need, he will become a star. It seems almost preordained. The open smile says, "You will love me," and soon the whole world does.

The young boy's name was Tab Hunter—a made-up name, of course, a Hollywood name—and it was his time. Stardom didn't come overnight, although it seemed that way. In fact, the fame came first, when his face adorned hundreds of magazine covers; the movies, the studio contract, the name in lights—all that came later. For Tab Hunter was a true product of Hollywood, a movie star created from a stable boy, a shy kid made even more so by the way his schoolmates—both girls and boys—reacted to his beauty, by a mother who provided for him in every way except emotionally, and by a secret that both tormented him and propelled him forward.

In Tab Hunter Confidential: The Making of a Movie Star, Hunter speaks out for the first time about what it was like to be a movie star at the end of the big studio era, to be treated like a commodity, to be told what to do, how to behave, whom to be seen with, what to wear. He speaks also about what it was like to be gay, at first confused by his own fears and misgivings, then as an actor trapped by an image of boy-next-door innocence. And when he dared to be difficult, to complain to the studio about the string of mostly mediocre movies that were assigned to him, he learned that just like any manufactured product, he was disposable—disposable and replaceable.

Hunter's career as a bona fide movie star lasted a decade. But he persevered as an actor, working continuously at a profession he had come to love, seeking—and earning—the respect of his peers, and of the Hollywood community.

And so, Tab Hunter Confidential is at heart a story of survival—of the giddy highs of stardom, and the soul-destroying lows when phone calls begin to go unreturned; of the need to be loved, and the fear of being consumed; of the hope of an innocent boy, and the rueful summation of a man who did it all, and who lived to tell it all.

Tab Hunter, a star of screen, stage, and television, has appeared in more than fifty films, including Damn Yankees, Battle Cry, and Polyester. He continues to work as a film producer, and lives in southern California.

Eddie Muller, an authority on film noir, is the author of Dark City Dames as well as two mystery novels. He lives in the San Francisco area.

Praise For Tab Hunter Confidential: The Making of a Movie Star…

“This bio might be the best work of [Tab Hunter’s] career. He takes readers on a gleeful romp.” —Entertainment Weekly
or
Not Currently Available for Direct Purchase
Copyright © 2020 American Booksellers Association