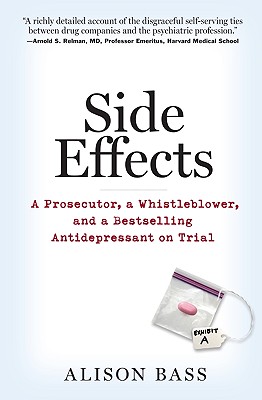 A Prosecutor, a Whistleblower, and a Bestselling Antidepressant on Trial

As the mental health reporter for the Boston Globe, Alison Bass's front-page reporting on conflicts of interest in medical research stunned readers, and her series on sexual misconduct among psychiatrists earned a Pulitzer Prize nomination. Now she turns her investigative skills to a controversial case that exposed the increased suicide rates among adolescents taking antidepressants such as Paxil, Prozac, and Zoloft.

Side Effects tells the tale of a gutsy assistant attorney general who, along with an unlikely whistle-blower at an Ivy League university, uncovered evidence of deception behind one of the most successful drug campaigns in history. Paxil was the world's bestselling antidepressant in 2002. Pediatric prescriptions soared, even though there was no proof that the drug performed any better than sugar pills in treating children and adolescents, and the real risks the drugs posed were withheld from the public. The New York State Attorney General's office brought an unprecedented lawsuit against giant manufacturer GlaxoSmithKline, the maker of Paxil, for consumer fraud. The successful suit launched a tidal wave of protest that changed the way drugs are tested, sold, and marketed in this country.

With meticulous research, Alison Bass shows us the underbelly of the pharmaceutical industry. She lays bare the unhealthy ties between the medical establishment, big pharma, and the FDA—relationships that place vulnerable children and adults at risk every day.

Praise For Side Effects: A Prosecutor, a Whistleblower, and a Bestselling Antidepressant on Trial …

"Side Effects is long-form journalism at its best."—Washington Post

Alison Bass has covered medicine, science, and technology for the Boston Globe and other publications, including the Miami Herald, Psychology Today, and Technology Review. She has received top media awards from the National Mental Health Association and the National Alliance for the Mentally Ill, and an Associated Press First Place Award. She has taught journalism courses at Boston and Brandeis universities and lives in Newton, Massachusetts.
Loading...
or
Not Currently Available for Direct Purchase