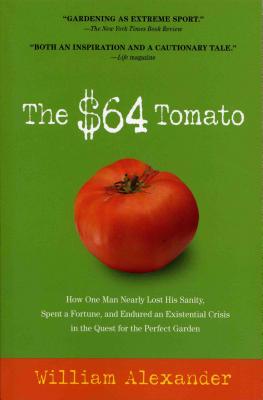 How One Man Nearly Lost His Sanity, Spent a Fortune, and Endured an Existential Crisis in the Quest for the Perfect Garden

Bill Alexander had no idea that his simple dream of having a vegetable garden and small orchard in his backyard would lead him into life-and-death battles with groundhogs, webworms, weeds, and weather; midnight expeditions in the dead of winter to dig up fresh thyme; and skirmishes with neighbors who feed the vermin (i.e., deer). Not to mention the vacations that had to be planned around the harvest, the near electrocution of the tree man, the limitations of his own middle-aged body, and the pity of his wife and kids. When Alexander runs (just for fun!) a costbenefit analysis, adding up everything from the live animal trap to the Velcro tomato wraps and then amortizing it over the life of his garden, it comes as quite a shock to learn that it cost him a staggering $64 to grow each one of his beloved Brandywine tomatoes. But as any gardener will tell you, you can't put a price on the unparalleled pleasures of providing fresh food for your family.

Praise For The $64 Tomato: How One Man Nearly Lost His Sanity, Spent a Fortune, and Endured an Existential Crisis in the Quest for the Perfect Garden…