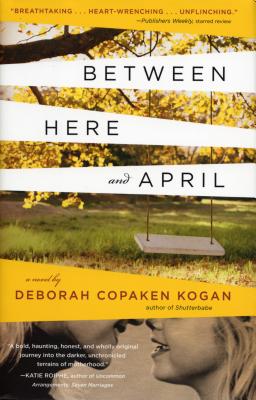 Between Here and April

“I loved Between Here and April, which on so many levels raises issues -- memory, facing the past and admitting its impact on the present, motherly love, and fidelity -- all in a novel that has a suspenseful race to its conclusion. Readers will be satisfyingly rewarded.”
— Cheryl McKeon, Third Place Books, Lake Forest Park, WA
View the List

When a deep-seated memory suddenly surfaces, Elizabeth Burns becomes obsessed with the long-ago disappearance of her childhood friend April Cassidy. Driven to investigate, Elizabeth discovers a thirty-five-year-old newspaper article revealing the details that had been hidden from her as a child—shocking revelations about April's mother, Adele.

Elizabeth, now herself a mother, seeks out anyone who might help piece together the final months, days, and hours of this troubled woman's life, but the answers yield only more questions. And those questions lead back to Elizabeth's own life: her own compromised marriage, her increasing self-doubt and dissatisfaction, and finally, a fearsome reckoning with what it means to be a wife and mother.

Praise For Between Here and April…

"Extraordinary . . . fascinating and detailed . . . this is a story that needs to be told."—Elle

"An amalgamation of autobiography, true crime and melodrama. . . . The story is so engaging... a credit to this narrator's wonderfully appealing voice: funny, frustrated, likable, totally candid about her desires and failings...The perfect book club book."—Washington Post

“This exceptional, riveting novel will haunt you long after you've reached the end.”—Rocky Mountain News

"The perfect book club book...An amalgamation of autobiography, true crime and melodrama...The story is so engaging...A credit to this narrator's wonderfully appealing voice: funny, frustrated, likable, totally candid about her desires and failings." —The Washington Post


"Extraordinary...Fascinating and detailed...This is a story that needs to be told." —Elle, #1 Reader's Pick


"[A] haunting page-turner...A compelling look at what it means to be a mother and a wife." —Working Mother

Deborah Copaken Kogan worked as a photojournalist from 1988 to 1992, and her photographs appeared in Time, Newsweek, The New York Times, L'Express, Liberation and Geo, among many other international newspapers and magazines. She spent the next six years in TV journalism, including a time as a producer for Dateline NBC. Her writings have appeared in The New Yorker, the New York Times and elsewhere. She is a Harvard alumna. She lives in New York City with her husband, Paul Kogan, and their three children.
Loading...
or
Not Currently Available for Direct Purchase