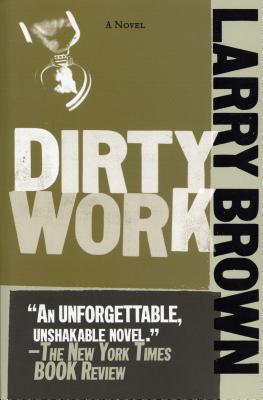 Dirty Work is the story of two men, strangers—one white, the other black. Both were born and raised in Mississippi. Both fought in Vietnam. Both were gravely wounded. Now, twenty-two years later, the two men lie in adjacent beds in a VA hospital.Over the course of a day and a night, Walter James and Braiden Chaney talk of memories, of passions, of fate.

With great vision, humor, and courage, Brown writes mostly about love in a story about the waste of war.

“The writing, the characters, and the plot are so compelling that you can't help but stay with the book until its conclusion.” —Washington Post Book World

“There has been no antiwar novel . . . quite like Larry Brown's Dirty Work.” —The New York Times

“One of the most powerful antiwar novels in American literature.” —The Atlanta Journal-Constitution

“A marvelous book . . . Brown's swift, intuitive dialogue explodes like a land mine and leaves the reader dizzy with shock.” —The Kansas City Star

“A powerful and original work all its own that moves along in short, staccato chapters with indisputably authentic language.” —The New York Times

“An unsparing book, at once brutal and compassionate, horrible, yet funny, too.” —The Philadelphia Inquirer

“Courageous . . . It's hard to imagine a more powerful effect than the one Brown creates with his attentive, unsparing prose.” —St. Louis Post-Dispatch

“[Brown] has created two fully realized, believable—and often very funny—characters . . . No one who reads this book is likely to forget them.” —The Houston Post

Larry Brown was born in Lafayette County, Mississippi, where he lived all his life. At the age of thirty, a captain in the Oxford Fire Department, he decided to become a writer and worked toward that goal for seven years before publishing his first book, Facing the Music, a collection of stories, in 1988. With the publication of his first novel, Dirty Work, he quit the fire station in order to write full time. (The nonfiction book On Fire tells the story of his many years as a firefighter.) Between then and his untimely death in 2004, he published seven more books. He was awarded the Mississippi Institute of Arts and Letters award for fiction and was the first two-time winner of the Southern Book Award for Fiction, which he won in 1992 for Joe, and again in 1997 for Father and Son. He was the recipient of a Lila Wallace-Readers Digest Award and Mississippi's Governor's Award For Excellence in the Arts. The story "Big Bad Love" became the basis for a feature film, as did his novel Joe.
Loading...
or support indie stores by buying on