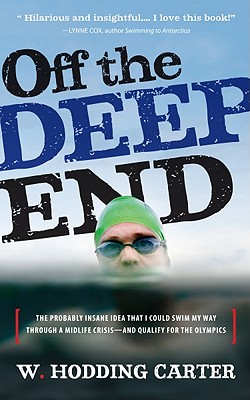 Off the Deep End

Hodding Carter dreamed of being an Olympian as a kid. He worshipped Mark Spitz, swam his heart out, and just missed qualifying for the Olympic trials in swimming as a college senior. Although he didn't qualify for the 1976, 1980, 1984, 1988, 1992, 1996, 2000, or 2004 Olympics, he never stopped believing he could make it. And despite past failures and the passage of time, Carter began his quest once more at the age of forty-two.

Maybe he's crazy. But then again, maybe he's onto something. He entered the Masters Championships. He swam three to four miles each day, six days a week. He pumped iron, trained with former Olympians, and consulted with swimming gurus and medical researchers who taught him that the body doesn't have to age. He swam with sharks (inadvertently) in the Virgin Islands, suffered hypothermia in a relay around Manhattan, and put on fifteen pounds of muscle. Amazingly, he discovered that his heartbeat could keep pace with the best of the younger swimmers'. And each day he felt stronger, swam faster, and became more convinced that he wasn't crazy.

This outrageous, courageous chronicle is much more than Carter's race with time to make it to the Olympics. It's the exhilarating story of a man who rebels against middle age the only way he can—by chasing a dream. His article in Outside magazine, on which this book is based, was the winner of a Lowell Thomas award from the Society of American Travel Writers Foundation.

Praise For Off the Deep End…

“So well-written that even non-swimmers will enjoy reading about Carter’s Olympic quest.”—Kirkus Reviews

W. Hodding Carter was an NCAA Division III All-American and a national champion on his college swim team. He is a contributing writer for Outside magazine, has written for Esquire and Gourmet, and is the author of five previous books of nonfiction.
Loading...
or
Not Currently Available for Direct Purchase