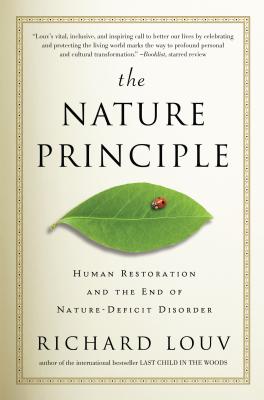 Human Restoration and the End of Nature-Deficit Disorder


Praise For The Nature Principle: Human Restoration and the End of Nature-Deficit Disorder…

“Louv describes the many ways in which reconnecting to the natural world is fundamental to human well-being…I believe [Louv’s] onto something important, and not just for children…So consider this a bit of health care advice: Get outside and dive in - nose first.” – Charlotte Observer

“Louv’s vital, inclusive, and inspiriting call to better our lives by celebrating and protecting the living world marks the way to profound personal and cultural transformation.”—Booklist, starred review
— Booklist

"Louv takes nature-deficit disorder, introduce in his seminal Last Child in the Woods, a step further, to argue that adults need nature, too . . . [This] book may be just what our high-tech, urban culture needs to bring us down to earth." --Publishers Weekly
— Austin Chronicle

“[Louv’s] onto something important here, something lasting, and by the time you turn the final page, you’ll not only understand why you should make or deepen your own connections to nature, you’ll know how… His book is a stirring argument for not waiting a moment longer.” —San Diego Union Tribune
— Chicago Tribune

“Louv's writing style is clear and raises many valid points…Louv's latest isn't much more than age-old wisdom, but it bears repeating in an asphalt-coated world.” – Austin American Statesman
— Westword

“What would life be like if we were as immersed in nature as we are in electronics? In Richard Louv’s world, we’d be happier and healthier. We’d experience fewer cases of depression, anxiety and attention deficit disorder. And we’d build smarter, more sustainable communities.” – Chicago Tribune
— Milwaukee Journal Sentinel

“[A] forward-looking book for NDD sufferers of all ages. In The Nature Principle, Louv takes stock of exactly what we’ve lost in leaving the natural world behind and how we might get it back.” –Westword
— Minneapolis Star Tribune

“Parents, Richard Louv doesn't hesitate to tell you that your kids should spend more time outdoors, in nature. And that you should, too.” – Milwaukee Journal Sentinel
— Kirkus Reviews

“The Nature Principle is, in essence, a book for grown-ups who crave -- and need -- nature just as much as kids” – Minneapolis Star Tribune
— Robert Michael Pyle

“Louv takes his ideas about the healing power of the outside world and adds layers of how-to action to help make his vision a reality…One thing you’ll likely come away with after reading The Nature Principle is that, while time is of the essence where protecting and preserving nature is concerned, it’s not too late to make a difference.” – Cascadia Weekly
— Carl Pope, Chairman of The Sierra Club

“A sound argument for the importance of the natural world… Age-old wisdom, but it bears
repeating in an asphalt-coated world.”—Kirkus Reviews
— Richard J. Jackson

“In The Nature Principle, Rich Louv has given us once again exactly the book we most need, for now and for all time.  Our expanding species hasn't a chance to continue living well and happily in a finite world unless we adapt our hungry lives to the rest of nature better than we have.  This elegant, original, good-humored, and stunningly thorough work shows us our way home in the world: it is no less than a new Law of Nature, and we had better pay attention.”—Robert Michael Pyle, author of The Thunder Tree: Lessons from an Urban Wildland and Mariposa Road
— ForeWord reviews

"Deprive an individual of everything that nurtured them -- and you're going to have a mess.  Deprive a species of everything that nurtured us -- you have 21st century Americans.  We grew up in the wild, and when we moved from the African veldt to the European and North American forests, the wild went with us.  Now we have set up an elaborate society designed to strip us of the environment that made us -- and Richard Louv is speaking out, inspirationally, on why it doesn't have to be this way."  -- Carl Pope, Chairman, The Sierra Club

“We have created environments that make us sad, fat and unhealthy.  Richard Louv has made an insightful diagnosis and offers powerful treatment with the medicine we all need, Vitamin N.”    -- Richard J. Jackson, MD, Chair, Environmental Health Sciences, UCLA School of PublicHealth

“Louv's proposal is for a "renaturing of everyday life," and his lively discussion of how to accomplish this is likely to inspire many readers. His is not a doomsday prognosis but rather an inspired prescription for health, happiness, and a world in which humans and nature are in alignment… His last book spurred a movement to get kids outside because to do otherwise "threatens our health, our spirit, our economy and our future stewardship of the environment."  Based on the timeliness and breadth of Luov’s research, it seems likely that The Nature Principal will build on that momentum and change more than a few lives for the better.”—ForeWord Reviews

“The Nature Principle manages to both teach and delight. Think of it as a refreshing hike for the mind and soul.” —Oprah.com

Richard Louv is a journalist and the author of ten books, including Last Child in the Woods: Saving Our Children from Nature-Deficit Disorder, The Nature Principle, and Vitamin N. Translated into twenty languages, his books have helped launch an international movement to connect children, families, and communities to nature. He is cofounder and chair emeritus of the nonprofit Children & Nature Network, which supports a new nature movement. Louv has written for the New York Times, Outside magazine, Orion Magazine, Parents, and many other publications. He appears regularly on national radio and TV, and lectures throughout the world. In 2008, he was awarded the Audubon Medal. Prior recipients have included Rachel Carson, E. O. Wilson, President Jimmy Carter, and Sir David Attenborough.
Loading...
or
Not Currently Available for Direct Purchase