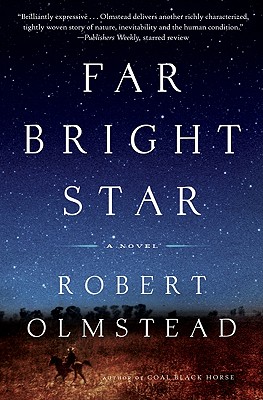 The year is 1916. The enemy, Pancho Villa, is elusive. Terrain is unforgiving. Through the mountains and across the long dry stretches of Mexico, Napoleon Childs, an aging cavalryman, leads an expedition of inexperienced horse soldiers on seemingly fruitless searches. Though he is seasoned at such missions, things go terribly wrong, and his patrol is suddenly at the mercy of an enemy intent on their destruction. After witnessing the demise of his troops, Napoleon is left by his captors to die in the desert.

Through him we enter the conflicted mind of a warrior as he tries to survive against all odds, as he seeks to make sense of a lifetime of senseless wars and to reckon with the reasons a man would choose a life on the battlefield. Olmstead, an award-winning writer, has created a tightly wound novel that is as moving as it is terrifying.

“Another meditative, beautifully written novel from Olmstead . . . Olmstead is wondrously attuned to the natural world and the realities of war; he uses sand, heat and distant mountains as a stage set, and his narrative unfolds with all the formal rigor of a Greek tragedy . . . Brutal, tender and magnificent.”—Kirkus Reviews, starred review

"Tautly written and laced with tension . . . Riveting visual effects . . . Olmstead offers a sort of 'thinking-reader's' western . . . Verbal precision and historical accuracy combine with a poetic distillation of a tragic event presented in a solidly captivating reading experience that haunts the mind long after the final page is turned.” —The Dallas Morning News

"Gleaming, spellbinding fiction . . . Terrifying and abruptly beautiful, the new novel gleams with a masculine intensity; it is hard to read and hard to put down . . . i did succumb, yet again, to the strong spell of Olmstead’s storytelling."—The Cleveland Plain Dealer

Robert Olmstead is the author of seven previous books. Coal Black Horse was the winner of the Heartland Prize for Fiction and the Ohioana Award, and was a #1 Book Sense pick and a Border’s Discover pick. Far Bright Star was the winner of the Western Writers of America Spur Award. He is the recipient of a Guggenheim Fellowship and an NEA grant, and is a professor at Ohio Wesleyan University.
Loading...
or
Not Currently Available for Direct Purchase