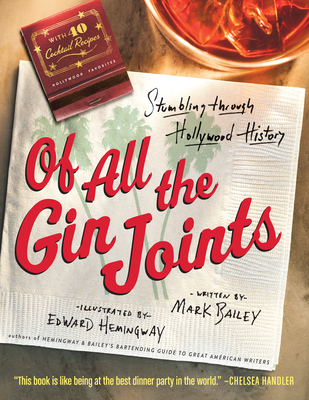 Of All the Gin Joints

True tales of celebrity hijinks are served up with an equal measure of Hollywood history, movie-star mayhem, and a frothy mix of forty cocktail recipes.

Humphrey Bogart got himself arrested for protecting his drinking buddies, who happened to be a pair of stuffed pandas. Ava Gardner would water-ski to the set of Night of the Iguana holding a towline in one hand and a cocktail in the other. Barely legal Natalie Wood would let Dennis Hopper seduce her if he provided a bathtub full of champagne. Bing Crosby’s ill-mannered antics earned him the nickname “Binge Crosby.” And sweet Mary Pickford stashed liquor in hydrogen peroxide bottles during Prohibition. From the frontier days of silent film up to the wild auteur period of the 1970s, Mark Bailey has pillaged the vaults of Hollywood history and lore to dig up the true—and often surprising—stories of seventy of our most beloved actors, directors, and screenwriters at their most soused.

Bite-size biographies are followed by ribald anecdotes and memorable quotes. If a star had a favorite cocktail, the recipe is included. Films with the most outrageous booze-soaked stories, like Apocalypse Now, From Here to Eternity, and The Misfits, are featured, along with the legendary watering holes of the day (and the recipes for their signature drinks). Edward Hemingway’s portraits complete this spirited look at America’s most iconic silver-screen legends.

Praise For Of All the Gin Joints: Stumbling through Hollywood History…

“Booze it up with F. Scott! Roll one with McQueen! In Of All The Gin Joints, you can experience the true measure of showbiz debauchery without the annoying side effects of divorce, death, or unfulfilled potential!” —Rob Lowe, author of Love Life

“Foodies and celebrity watchers alike will be delighted by this walk through Hollywood drinking history.” —Library Journal, starred review

“Sensational stories of drinking and excess by Hollywood celebrities . . . [A] scrapbook approach, full of boxes and sidebars and illustrated with numerous cartoons by Edward Hemingway, while the stories are funny, sad and at times, unbelievable in the way only Hollywood could pull off.” —Forbes.com

“Hollywood gossip before TMZ came along and ruined it for everyone.” —BookRiot

“Emmy-nominated screenwriter Mark Bailey has concocted a heady mixture of stories from Hollywood watering holes . . . Snappy little bios of some of Hollywood’s most famous imbibers . . . And like an olive in a dry martini, Edward Hemingway’s slightly off-kilter illustrations are a nice adornment. Cheers!” —Newsday

“An irresistible compendium of Hollywood inebriates. It’s one part history, one part cocktail recipe book, topped off with soulful black-and-white caricatures . . . Whatever your preferences or level of party, your knowledge of Hollywood or mixology, Of All the Gin Joints has something for everyone.” —KirkusReviews.com

“This wonderful combination of words and pictures is the perfect cocktail of a book: sweet enough to go down easily, sour enough to cleanse the palate, and strong enough to leave you giddy. I gulped down the first half and sipped the second half slowly, but when I finished I still wanted more!” —Walter Kirn, author of Blood Will Out and Up in the Air

“Of All the Gin Joints is one part cinematic history, one part old Hollywood weirdness, and one part handy basic bar guide, with a dash of romance and more than a few wry twists. Bailey and Hemingway prove themselves very entertaining cultural mixologists.” —Sam Lipsyte