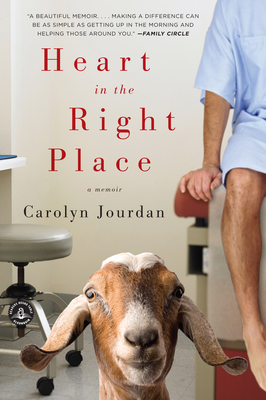 Heart in the Right Place

Carolyn Jourdan, an attorney on Capitol Hill, thought she had it made. But when her mother has a heart attack, she returns home—to the Tennessee mountains, where her father is a country doctor and her mother works as his receptionist. Jourdan offers to fill in for her mother until she gets better. But days turn into weeks as she trades her suits for scrubs and finds herself following hazmat regulations for cleaning up bodily fluids; maintaining composure when confronted with a splinter the size of a steak knife; and tending to the loquacious Miss Hiawatha, whose daily doctor visits are never billed. Most important, though, she comes to understand what her caring and patient father means to her close-knit community.

With great humor and great tenderness, Heart in the Right Place shows that some of our biggest heroes are the ones living right beside us.

Praise For Heart in the Right Place…

Carolyn Jourdan must leave her glamorous, fast-paced life in Washington, D.C., in order to return to her small hometown to help her parents. What kinds of sacrifices have you made for your family? In what ways did those sacrifices affect your life? Were you, like the author, surprised by how you were changed by them?

Jourdan reflects on the differences between Michael and Harley’s lives: “Harley had a death wish. He’d been graced with an extraordinary physique, and he abused his body and sought release from the world. Michael, who’d been born with a bad heart . . . struggled heroically to stay alive day by day”. She then concludes, “If there was one thing I’d learned growing up in a doctor’s office, it was that people’s mood was rarely dependent on their external circumstances. Its origin was almost always internal”. Do you find that this distinction holds true based on your own experiences? Are there people you know who reflect Michael and Harley’s different approaches to life, and if so, in what ways?

Early on, Fletcher says to the author, “Your daddy’s smart. He could’ve done anything, could’ve been any kind of doctor and got rich, but he came out here instead cause he wanted to help people”. What are the trade-offs in being a small-town doctor versus being a doctor in the big city? What is gained and lost on both sides? What would we lose if small-town doctors disappeared?

When Jim Garrison comes to the office with a life-threatening emergency, the author thinks, “Somebody’s gotta do something about this”. She suddenly realizes that her father is the only person who can help. Have you ever been in a situation where you were the only person who could help, and if so, how did you manage it?

After Taylor Jackson leaves the office, the author thinks, “Every day in this place was spent viewing the most personal and critical moments of other people’s lives. . . . I was inadequate to the experience”. Do you believe that’s true? How would you respond to the situations Carolyn Jourdan faces in her father’s office?

During one of her telephone conversations with Jacob, the author says, “You know how we always talk about wanting to be in public service so we can help people. . . . Well, in this place I feel sometimes like I really am helping people. Actual people. It’s not just an idea. I can’t help them much. I know it’s not glamorous, but sometimes I think maybe I’m doing more good swab-bing up body fluids and being a friendly face here than I ever did working in the Senate”. Discuss the different ways people help each other. How do you think caring for others informs who you are? Share an experience you had directly assisting someone.

Discuss the ways in which Carolyn Jourdan’s view of her father and mother shifts over the year. For instance, early on she describes them as “stoic” and “utterly self-contained”. How does she see them by the end of the book?

When the author catches a glimpse of a human heart during surgery, she says to Henry, “If that’s the heart, I gotta say, it don’t look like much”. Henry smiles and says, “A lot of the most important things in life ‘don’t look like much.’ ” Can you think of other examples in the book for which this holds true? Does this statement reflect a situation you have experienced?

Near the end of the book, the author realizes the true significance of the story about performing surgery with a pocketknife: “I’d always thought the story was about the astounding surgery. But it wasn’t. It was about using the talents you had, whatever they might be, to the most constructive purpose”. Who else mirrors this sentiment and why? Historical figures? People in your own life? To what degree is this true for yourself?