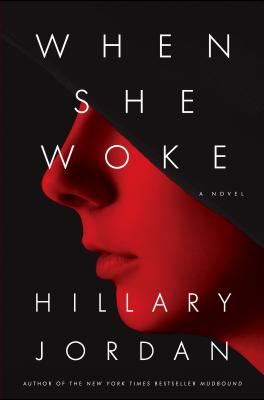 When She Woke (Hardcover)

“Inspired by The Scarlet Letter, this is a stunning, suspenseful, and scary look at what happens to Hannah Payne when she is arrested and convicted of having an abortion in a futuristic America. Her punishment is to become a 'chrome,' a criminal whose skin color is genetically altered to reflect her crime. Hannah becomes a Red for the crime of murder, and she further complicates her situation by refusing to name the father of her unborn child. Once chromed, she is released and must survive as best she can. Her navigation through the perils of a hostile society launches Hannah on a journey of self-discovery and makes readers question the consequences of politicizing the personal. Jordan's characters are compelling and her pacing is flawless; I couldn't put this book down!”
— Erica Caldwell, Present Tense, Batavia, NY
View the List

Bellwether Prize winner Hillary Jordan’s provocative new novel, When She Woke, tells the story of a stigmatized woman struggling to navigate an America of a not-too-distant future, where the line between church and state has been eradicated and convicted felons are no longer imprisoned and rehabilitated but chromed—their skin color is genetically altered to match the class of their crimes—and then released back into the population to survive as best they can. Hannah is a Red; her crime is murder.

In seeking a path to safety in an alien and hostile world, Hannah unknowingly embarks on a path of self-discovery that forces her to question the values she once held true and the righteousness of a country that politicizes faith.

Praise For When She Woke…

“Jordan manages to open up powerful feminist and political themes without becoming overly preachy—and the parallels with Hawthorne are fun to trace.”—Kirkus
— Library Journal

“Christian fundamentalists may shun this novel, but book clubs will devour it, and savvy educators will pair it with Hawthorne’s Scarlet Letter. Essential.”—Library Journal
— Booklist

“Jordan blends hot-button issues such as separation of church and state, abortion, and criminal justice with an utterly engrossing story, driven by a heroine as layered and magnetic as Hester Prynne herself, and reminiscent, too, of Margaret Atwood’s The Handmaid’s Tale (1985). Absolutely a must-read.”—Booklist, starred review
— Family Circle

“[A] provocative, politically charged novel... [Hannah’s] journey to reclaim herself is equally chilling and riveting.”—Family Circle
— The Book Case

“It reads like a thriller, and one that makes you think hard, to boot. I’ve already placed this one on my favorite-books-for-book-clubs list.”—The Book Case

“An utterly engrossing story, driven by a heroine as layered and magnetic as Hester Prynne herself, and reminiscent, too, of Margaret Atwood’s The Handmaid’s Tale. Absolutely a must-read.”
—Booklist, starred review

“The Scarlet Letter could unfurl from no better a speculative pen than that held by Hillary Jordan. She takes the seeds of that story and roots them in a world where ‘right to life’ is the law of the land . . . The result . . . is as compulsively readable as it is thought-provoking.”
—The Denver Post

“In the chillingly credible tomorrowland of Jordan’s second novel, Roe v. Wade has been overturned, abortion has been criminalized in 42 states and a vigilante group known as the Fist of Christ brutalizes violators . . . Jordan’s feverishly conceived dystopia holds its own alongside the dark inventions of Margaret Atwood and Ray Bradbury.”
—The New York Times Book Review

“Hannah’s fight for freedom is both a sober warning and a gripping page-turner. Already it reads like a classic.” —AARP

“An inventive tale about a new America that has lost its way . . . When She Woke is, at its heart, a tense, energetic and lively paced story about self-discovery and reclamation in the wake of enormous shame. It is a story about the price of love.”
—Minneapolis Star Tribune

“Will spark many an intriguing book club discussion.” —The Cleveland Plain Dealer
or
Not Currently Available for Direct Purchase
Copyright © 2020 American Booksellers Association