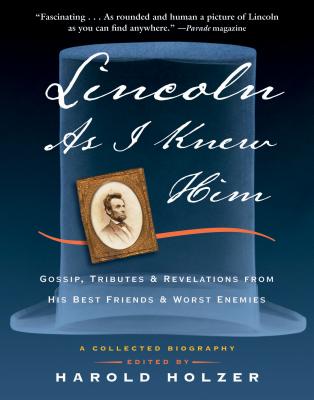 Lincoln as I Knew Him

Gossip, Tributes, and Revelations from His Best Friends and Worst Enemies

Forget what you think you know about Abraham Lincoln. Yes, he was a brilliant orator, a shrewd politician, and a determined leader who guided us through the bloodiest war in American history. But he also was a terrible dresser, rarely bothered to comb his hair, annoyed his colleagues by constantly reading out loud, loved raunchy stories, and let his kids run all over him.

Author and Lincoln scholar Harold Holzer sifted through nineteenth-century letters, diary entries, books, and speeches written by people who knew Lincoln and offers up the real skinny on the man who was arguably America's greatest president. From the famous—Nathaniel Hawthorne, Harriet Beecher Stowe, Frederick Douglass, Ulysses S. Grant—to the not-so-famous—White House secretaries, artists, bodyguards, childhood pals, and a rejected fiancée—this collection presents a revealing, and at times contradictory, view of our sixteenth president, from his boyhood through his White House years. These firsthand anecdotes and recollections strip away the myths and legends to uncover the authentic Abraham Lincoln before the history books got hold of him.

Praise For Lincoln as I Knew Him: Gossip, Tributes, and Revelations from His Best Friends and Worst Enemies…

“There are gems throughout.” —Chicago Tribune

"Inspiring . . . A collection that sheds light not only on Lincoln but also on his times." —Publishers Weekly

"Wonderfully thorough . . . even the most well-read of Lincoln lovers is sure to find something they have never read before." — The Civil War News

Harold Holzer is one of the country’s leading authorities on Abraham Lincoln and the political culture of the Civil War era. He has published over thirty books, including "The New York Times" Complete Civil War (Black Dog and Leventhal), and is the recipient of numerous awards, among them the Lincoln Prize and the National Humanities Medal. He lectures widely, appears on television frequently, and has written for the New York Times, American Heritage, and America’s Civil War. Most recently he served as co-chair of the United States Abraham Lincoln Bicentennial Commission and is senior vice president for external affairs at the Metropolitan Museum of Art in New York. Find him online at www.haroldholzer.com.