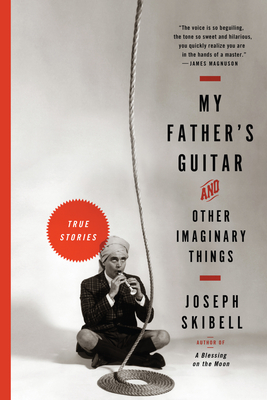 My Father's Guitar and Other Imaginary Things

Often comic, sometimes tender, profoundly truthful, the pleasure in these nonfiction pieces by award-winning novelist Joseph Skibell is discovering along with the author that catastrophes, fantasies, and delusions are what give sweetness and shape to our lives.

“As a writer,” Skibell has said, “I feel about life the way the people of the Plains felt about the buffalo: I want to use every part of it.” In My Father’s Guitar and Other Imaginary Things, his first nonfiction work, he mines the events of his own life to create a captivating collection of personal essays, a suite of intimate stories that blurs the line between funny and poignant, and between the imaginary and the real.

Often improbable, these stories are 100 percent true. Skibell misremembers the guitar his father promised him; together, he and a telemarketer dream of a better world; a major work of Holocaust art turns out to have been painted by his cousin. Woven together, the stories paint a complex portrait of a man and his family: a businessman father and an artistic son and the difficult love between them; complicated uncles, cousins, and sisters; a haunted house; and—of course—an imaginary guitar.

Skibell’s novels have been praised as “startlingly original” (the Washington Post), “magical” (the New Yorker), and the work of “a gifted, committed imagination” (the New York Times). With his distinctive style, he has been referred to as “the bastard love child of Mark Twain, I. B. Singer, and Wes Anderson, left on a doorstep in Lubbock, Texas.”


Praise For My Father's Guitar and Other Imaginary Things…

“[ Joseph Skibell is] a bit of a wise shaman sharing his gently amusing, offbeat life lessons. There’s something unusually endearing and sweet about the 16 “true stories” in My Father's Guitar and Other Imaginary Things.”—NPR.org

“It’s easy to see why a writer blurbing this book describes [Skibell] as a ‘literary Louis CK.’ These shards of life have the feel of the standup performances you might here at New York’s The Moth.”—Toronto Star

“[Joseph Skibell] manages to find humor and self-effacing wit even while contemplating his own mortality and possibly defective memory. Skibell discovers that even when writing so-called ‘true’ stories, all lives are filled with imaginary things.”—Atlanta Journal Constitution

“This book was like candy to me, the best candy, the kind you find yourself tiptoeing into the kitchen for all night long, trying to sneak one more piece before you're ordered to bed . . . The voice is so beguiling, the tone so sweet and hilarious, you quickly realize that you are in the hands of a master . . . Mr. I. B. Singer, meet Mr. Twain. This is a book to be prized in the way readers prize the work of Charles Portis.” —James Magnuson, author of Famous Writers I Have Known

“Humorous and heartfelt  . . . Whether the stories are mere snapshots or more extended, [Skibell] writes with a humor that flies under the radar until a joke pops up with a well-timed zing. The emotional core of the stories, though, revolves largely around Skibell’s choppy relationship with his strict father. Skibell looks back on their differences with the emotional maturity that comes with time and distance, and his recollections, both funny and somber, resound with feeling.”—Booklist

“Colorful and endearing, the book will appeal to readers who appreciate Augusten Burroughs-style, real-life anecdotal ponderings focused on familial ties and how life's eternal cycle of enchantment and disillusionment somehow sustains us. A memoir/essay collection of consistently heartfelt and enlightening morsels of humanity.”—Kirkus Reviews

“When [Skibell] turns quietly to the spaces we occupy in real life . . .  a wink of illusion and philosophy can be expected . . . Skibell writes with the insight of a philosopher, conveying his ideas with the beauty of a craftsman.”—ArtsATL.com

“Stories? These wise and humane offerings aren’t stories; they’re musical notes, from a master composer. And they swirl and swell and come together and echo one another to create a concerto of love and sadness and warmth and humor that will linger in your memory long after reading, as the best music always does.” —Jeremy Dauber, author of The Worlds of Sholem Aleichem

“Joseph Skibell’s immense skills as an imaginative and lyrical novelist serve him well in these touching essays about memory and mysticism. You'll laugh and also feel a little bit achy as you hear the voice of an extraordinary storyteller and a wise and witty friend.” —Heidi Durrow, author of The Girl Who Fell from the Sky

“The brilliant novelist detours from fiction with this collection of 16 essays . . . deeply moving, slyly funny meditations on the limits of memory, the meaning of ghosts, and the value of stories.”—Atlanta Magazine