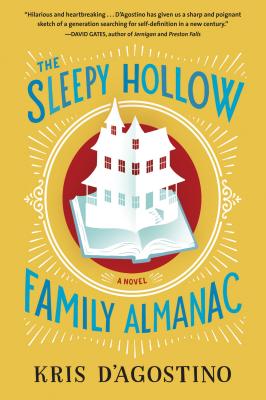 “Kris D'Agostino has penned a modern, dysfunctional family classic that tears away the melodrama that is found too often in the genre. The story of the Moretti's triumphs and tragedies is written with such a gritty, raw, visceral style, it leaves the reader shaken. Seldom does a book paint such a bleak picture of modern American home life while still, at its core, such a warm and caring heart and soul. Much like Calvin Moretti as the result of his trials and tribulations, this book will change you in ways you never expected.”
— Matt Falvey, Next Chapter Bookshop, Mequon, WI
View the List

In the spirit of novels by Nick Hornby and Tom Perrotta, a smart, funny debut about a disillusioned young man whose fledgling leap from postadolescence to adulthood lands him back in an already overburdened family nest.

Calvin Moretti can’t believe how much his life sucks. He’s a twenty-four-year-old film school dropout living at home again and working as an assistant teacher at a preschool for autistic kids. His insufferable go-getter older brother is also living at home, as is his kid sister, who’s still in high school and has just confided to Cal that she’s pregnant. What’s more, Calvin’s father, a career pilot, is temporarily grounded and obsessed with his own mortality. and his ever-stalwart mother is now crumbling under the pressure of mounting bills and the imminent loss of their Sleepy Hollow, New York, home: the only thing keeping the Morettis moored. Can things get worse? Oh, yes, they can.

Which makes it all the more amazing that The Sleepy Hollow Family Almanac is not only buoyantly fun but often very, very funny. In this debut novel, Kris D’Agostino has crafted an engrossing contemporary tale of a loopy but loving family, and in Calvin Moretti, he’s created an oddball antihero who really wants to do the right thing—if he can just figure out what it is.

“In his hilarious and heartbreaking novel, D’Agostino has given us a sharp and poignant sketch of a generation searching for self-definition in a new century.” —David Gates, author of Jernigan and Preston Falls

“A singularly funny, bitter, bold book about what it’s like to resemble people you want badly to be better than. This is a remarkable book about a remarkable family with disturbingly familiar problems.”
—Brock Clarke, author of Exley and An Arsonist’s Guide to Writers’ Homes in New England

Kris D’Agostino lives in Brooklyn, New York, and works in a preschool. This is his first novel.
Loading...
or support indie stores by buying on