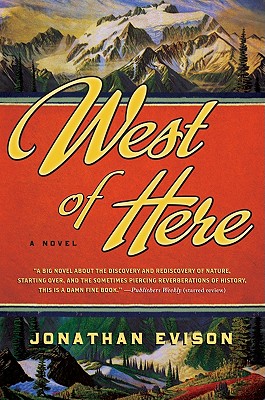 "Evison switches easily between 19th-century vernacular and contemporary lingo, and the tenderly funny result is both pioneer story and social commentary. You'll want to reread it to catch cross-references between the parallel stories." --American Way

"Evison, author of this audacious historical novel, manages a near-impossible feat: first, he creates an almost absurdly complex narrative structure, bridging more than 100 years of life in Washington State and encompassing multiple points of view, and then he grounds the sublime architechtonic whole in the vividly realized daily lives of characters who exist completely in their individual moments but whose actions reverberate back and forth across time . . . [This] is a testament to the books' greatness." --Booklist, starred review

“An enjoyable, meaty read—a vision of a place told through the people who find themselves at the edge of America’s idea of itself.” —Los Angeles Times

Jonathan Evison is the author of four previous novels, including All About Lulu, West of Here, The Revised Fundamentals of Caregiving, and This Is Your Life, Harriet Chance! He lives with his wife and family in Washington State.
Loading...
or
Not Currently Available for Direct Purchase