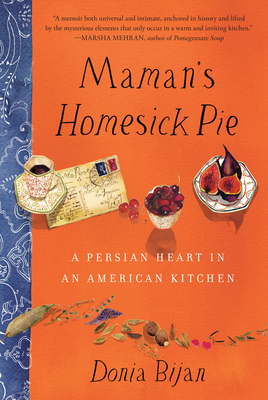 A Persian Heart in an American Kitchen

"A lavish taste of Persian culture and cuisine . . . [A] compelling, poignant and most delectable book."—BookPage

For Donia Bijan’s family, food has been the language they use to tell their stories and to communicate their love. In 1978, when the Islamic revolution in Iran threatened their safety, they fled to California’s Bay Area, where the familiar flavors of Bijan’s mother’s cooking formed a bridge to the life they left behind. Now, through the prism of food, award-winning chef Donia Bijan unwinds her own story, finding that at the heart of it all is her mother, whose love and support enabled Bijan to realize her dreams.

From the Persian world of her youth to the American life she embraced as a teenager to her years at Le Cordon Bleu in Paris (studying under the infamous Madame Brassart) to apprenticeships in France’s three-star kitchens and finally back to San Francisco, where she opened her own celebrated bistro, Bijan evokes a vibrant kaleidoscope of cultures and cuisines. And she shares thirty inspired recipes from her childhood (Saffron Yogurt Rice with Chicken and Eggplant and Orange Cardamom Cookies), her French training (Ratatouille with Black Olives and Fried Bread and Purple Plum Skillet Tart), and her cooking career (Roast Duck Legs with Dates and Warm Lentil Salad and Rose Petal Ice Cream).

An exhilarating, heartfelt memoir, Maman’s Homesick Pie is also a reminder of the women who encourage us to shine.

Praise For Maman's Homesick Pie: A Persian Heart in an American Kitchen…

“Treat yourself to this delectable debut. Bijan recounts her journey from well-off Iranian schoolgirl to teenager in America taking refuge from her country’s upheaval to restaurateur and mom. But ultimately this memoir is a loving tribute to her mother, her heritage—and food. Pour yourself a cup of cardamom tea (recipe included), and indulge in this savory slice of life.” —Family Circle

“Chapter by chapter, Bijan recreates the memory-menu of her life, incorporating recipes for the dishes that most poignantly capture the past for her. By its heart-plucking end, this literary feast accomplishes what only the best meals do, bestowing not only a satisfying culinary experience but also a larger appreciation of life’s precious table.”—National Geographic Traveler

"I closed the book feeling like the author had just been sharing memories and recipes with her many friends of the world, and that I was now one of them."
—The Minneapolis Star Tribune

"In its profound understanding of how food connects us to the past and future and to the places and people we love, Maman's Homesick Pie gets to the very heart of why recipes and food—and the stories we tell about them—matter so much."—Literary Mama

"Maman's Homesick Pie is one of the best food memoirs I have read . . . The recipes at the end of each chapter add surprising depth to her story."—Largehearted Boy
“The push-pull of Ms. Bijan’s relationship with her parents during their grief as she came of age will feel familiar to many readers, but the details of Ms. Bijan’s life will not.”—The New York Review of Books

“The memoir smoothly combines stories of Bijan's childhood in Iran and transitions to life in America with pieces of her parents' lives, and the family's migrations after the loss of their homeland… They are the quietly compelling stories of an ordinary family dealing with extraordinary circumstances. Memories of family are inextricably linked to food — the smells, the flavors, the look and feel of a dish — and Bijan brings foods both mundane and exotic to life in the pages.”
–Wichita Eagle


“In Bijan’s skillful hands ... recipes become a storytelling medium, and Maman’s Homesick Pie is at once a compelling portrait of her remarkable Iranian parents, a chronicle of her culinary career from a stagiaire (an unpaid apprenticeship) in France to award-winning chef and restaurateur in Palo Alto, and a lavish taste of Persian culture and cuisine... A compelling, poignant and most delectable book.” —BookPage online

A “wonderfully written memoir ... so well rendered ... Bijan writes movingly of her parents' accomplishments, their difficulty adjusting to their new home, and her own burgeoning love of food and cooking ... Like the perfect dessert, each chapter ends with recipes.”—Publishers Weekly

Donia Bijan is the author of the novel The Last Days of Café Leila and the memoir Maman’s Homesick Pie. She graduated from UC Berkeley and Le Cordon Bleu. After presiding over many of San Francisco's acclaimed restaurants and earning awards for her French-inspired cuisine, in 1994 she opened her own restaurant, L'amie Donia, in Palo Alto. Since closing her restaurant, she divides her days between teaching and writing.
Loading...
or
Not Currently Available for Direct Purchase