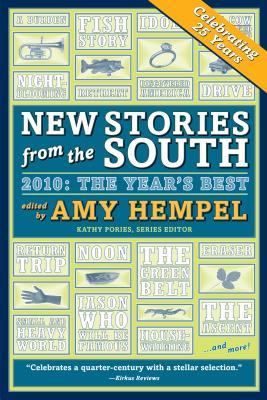 New Stories from the South 2010

Over the past twenty-five years, New Stories from the South has published the work of now well-known writers, including James Lee Burke, Andre Dubus, Barbara Kingsolver, John Sayles, Joshua Ferris, and Abraham Verghese and nurtured the talents of many others, including Larry Brown, Jill McCorkle, Brock Clarke, Lee Smith, and Daniel Wallace.

This twenty-fifth volume reachs out beyond the South to one of the most acclaimed short story writers of our day. Guest editor Amy Hempel admits, “I’ve always had an affinity for writers from the South,” and in her choices, she’s identified the most inventive, heartbreaking, and chilling stories being written by Southerners all across the country.

From the famous (Rick Bass, Wendell Berry, Elizabeth Spencer, Wells Tower, Padgett Powell, Dorothy Allison, Brad Watson) to the finest new talents, Amy Hempel has selected twenty-five of the best, most arresting stories of the past year. The 2010 collection is proof of the enduring vitality of the short form and the vigor of this ever-changing yet time-honored series.

A recipient of awards from the Guggenheim Foundation, the United States Artists Foundation, and the American Academy of Arts and Letters, Amy Hempel is the author of Reasons to Live, At the Gates of the Animal Kingdom, Tumble Home, and The Dog of the Marriage and the coeditor of Unleashed. Her stories have appeared in numerous publications and have been anthologized in The Best American Short Stories and The Norton Anthology of Short Fiction. Her Collected Stories was one of the New York Times’s ten best books of 2006. She won the Rea Award for the Short Story in 2008 and received the PEN/Malamud award for Short Fiction in 2009.