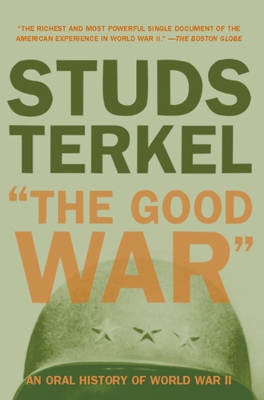 "The Good War", for which Studs Terkel won the Pulitzer Prize, is a testament not only to the experience of war but to the extraordinary skill of Terkel as interviewer. As always, his subjects are open and unrelenting in their analyses of themselves and their experiences, producing what People magazine has called "a splendid epic history of World War II." With this volume Terkel expanded his scope to the global and the historical, and the result is a masterpiece of oral history.

Studs Terkel (1912-2008) was an award-winning author and radio broadcaster. He is the author of Race: How Blacks and Whites Think and Feel About the American Obsession; Division Street: America, Coming of Age: Growing Up in the Twentieth Century; Talking to Myself: A Memoir of My Times; The Good War: An Oral History of World War II; Working: People Talk About What They Do All Day and How They Feel About What They Do; The Studs Terkel Reader: My American Century; American Dreams: Lost and Found; The Studs Terkel Interviews: Film and Theater; Hard Times: An Oral History of the Great Depression; Will the Circle Be Unbroken?: Reflections on Death, Rebirth, and Hunger for a Faith; Giants of Jazz; Hope Dies Last: Keeping the Faith in Troubled Times; And They All Sang: Adventures of an Eclectic Disc Jockey; Touch and Go: A Memoir; P.S.: Further Thoughts from a Lifetime of Listening; and Studs Terkel's Chicago, all published by The New Press. He was a member of the Academy of Arts and Letters and a recipient of a Presidential National Humanities Medal, the National Book Foundation Medal for Distinguished Contribution to American Letters, a George Polk Career Award, and the National Book Critics Circle 2003 Ivan Sandrof Lifetime Achievement Award.
Loading...
or support indie stores by buying on