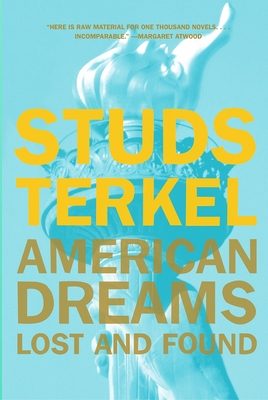 In this unique look at one of our most pervasive national myths, Studs Terkel persuades an extraordinary range of Americans to articulate their version of The American Dream. Beginning with an embittered winner of the Miss U.S.A. contest who sees the con behind the dream of success and including an early interview with a highly ambitious Arnold Schwarzenegger, Terkel explores the diverse landscape of the promise of the United States--from farm kids dreaming of the city to city kids determined to get out, from the Boston Brahmin to the KKK member, from newly arrived immigrants to families who have lived in this country for generations, these narratives include figures both famous and infamous. Filtered through the lens of our leading oral historian, the chorus of voices in American Dreams highlights the hopes and struggles of coming to and living in the United States. Originally published in 1980, this is a classic work of oral history that provides an extraordinary and moving picture of everyday American lives.

Studs Terkel (1912-2008) was an award-winning author and radio broadcaster. He is the author of Race: How Blacks and Whites Think and Feel About the American Obsession; Division Street: America; Coming of Age: Growing Up in the Twentieth Century; Talking to Myself: A Memoir of My Times; The Good War: An Oral History of World War II; Working: People Talk About What They Do All Day and How They Feel About What They Do; The Studs Terkel Reader: My American Century; American Dreams: Lost and Found; The Studs Terkel Interviews: Film and Theater; Hard Times: An Oral History of the Great Depression; Will the Circle Be Unbroken?: Reflections on Death, Rebirth, and Hunger for a Faith; Giants of Jazz; Hope Dies Last: Keeping the Faith in Troubled Times; And They All Sang: Adventures of an Eclectic Disc Jockey; Touch and Go: A Memoir; P.S.: Further Thoughts from a Lifetime of Listening; and Studs Terkel's Chicago, all published by The New Press. He was a member of the American Academy of Arts and Letters and a recipient of a Presidential National Humanities Medal, the National Book Foundation Medal for Distinguished Contribution to American Letters, a George Polk Career Award, and the National Book Critics Circle 2003 Ivan Sandrof Lifetime Achievement Award.
Loading...
or support indie stores by buying on