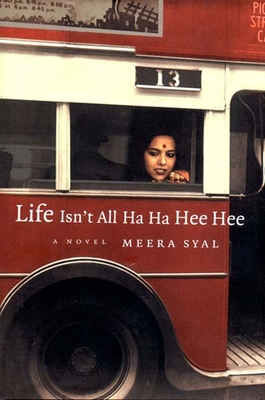 At home, Meera Syal's women "walk in small steps, talk in sweet tones, pour dainty cupfuls, and refill plates in the shake of a dupatta," but at work, they "kick ass across courtrooms and computer screens." In a book somewhere between Waiting to Exhale and Bridget Jones's Diary, Syal has created an indelible portrait of a close-knit group of Indian women living in London. Life Isn't All Ha Ha Hee Hee is the story of Chila, a nice Punjabi girl married to the urbane Deepak, and her two childhood confidants: Sunita, the former activist law student, now an overweight, depressed housewife and mother; and the chic, beautiful Tania, who has rejected marriage in favor of a high-powered career in television and life in a trendy apartment with her English boyfriend. This hilariously scathing, no-holds-barred novel from the award-winning author of Anita and Me describes what happens when one of them makes a documentary, starring the other two, about contemporary urban Indian life.

Meera Syal, a British-born Indian, is a writer and actress who is a familiar face on British TV. She has written a number of successful TV and film scripts, including Bhaji on the Beach and the multi-award-winning My Sister Wife, in which she also starred. She co-writes and stars in the British hit comedy series Goodness Gracious Me, which was nominated for an international Emmy and was awarded the MBE in 1998. She also performed in the star-studded London production of The Vagina Monologues. Her first novel, Anita and Me, won a Betty Trask Award and was shortlisted for the Guardian Fiction Prize. She lives in London.
or
Not Currently Available for Direct Purchase
Copyright © 2020 American Booksellers Association