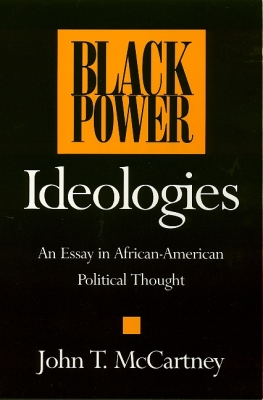 In a systematic survey of the manifestations and meaning of Black Power in America, John McCartney analyzes the ideology of the Black Power Movement in the 1960s and places it in the context of both African-American and Western political thought. He demonstrates, though an exploration of historic antecedents, how the Black Power versus black mainstream competition of the sixties was not unique in American history. Tracing the evolution of black social and political movements from the 18th century to the present, the author focuses on the ideas and actions of the leaders of each major approach.

Starting with the colonization efforts of the Pan-Negro Nationalist movement in the 18th century, McCartney contrasts the work of Bishop Turner with the opposing integrationist views of Frederick Douglass and his followers. McCartney examines the politics of accommodation espoused by Booker T. Washington; W.E.B. Du Bois's opposition to this apolitical stance; the formation of the NAACP, the Urban League, and other integrationist organizations; and Marcus Garvey's reawakening of the separatist ideal in the early 20th century. Focusing on the intense legal activity of the NAACP from the 1930s to the 1960s, McCartney gives extensive treatment to the moral and political leadership of Martin Luther King, Jr., and his challenge from the Black Power Movement in 1966.

"An important study of the history of Black Power ideologies.... This thoughtful, provocative, and well-argued work is clearly written and will make a contribution to Black and American intellectual history."
—Darlene Clark Hine, Michigan State University

"...deeply enrich[es] American historiography and take[s it]s place as part of what can be called a renaissance of interest in the study of African-American history."
—In These Times

"Black Power Ideologies is a significant contribution to scholarship, for while there are hundreds of books on Black Power, this work takes the concept from the colonial era to the 1960s, and provides an accompanying political analysis to its historical development. McCartney's treatment of Black Power thought in the 18th Century is at once illuminating and path-breaking; no author has as yet extended the concept of Black Power beyond the 19th Century. This is must reading for those who wish to observe Black abolitionists and colonizers in a new and fascinating perspective."
—John C. Walter, Director, Afro-American Studies, University of Washington, Seattle

The late John T. McCartney was Assistant Professor of Government at Lafayette College in Easton, Pennsylvania.
Loading...
or
Not Currently Available for Direct Purchase