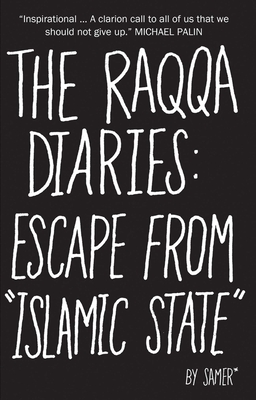 The Raqqa Diaries began as a series of short broadcasts on BBC Radio 4’s Today Program. Now one of the most isolated and fear ridden cities on earth, no-one is allowed to speak to western journalists or leave Raqqa, without ISIS’s permission. Those caught breaking the rules face death by beheading. Despite this, the BBC’s Mike Thomson, with the help of the BBC Arabic Service, found a young man who is willing to risk his life to tell the world what is happening in his city. Part of a small anti-ISIS activist group, the diaries were written, encrypted, and sent to a third country before being translated. The diarist’s father is killed and mother badly injured during an air strike; he is sentenced to 40 lashes for speaking out against a beheading; he sees a woman stoned to death. They show how every aspect of life is impacted—from the spiraling costs of food to dictating the acceptable length of a person’s pants. At one point, the sale of televisions is banned. As Samer says, “it seems it’s not enough to stop us talking to the outside world, now we can’t even look at it.” Having seen friends and relatives butchered, his community’s life shattered, and the local economy ruined by these hate-fuelled extremists, Samer believes he’s fighting back by telling the world what is happening to his beloved city. Raw, direct, and profoundly affecting, The Raqqa Diaries is an important book by a brave young man, which allows unprecedented access to the brutal conditions that many Syrians are living under.

Praise For The Raqqa Diaries: Escape from Islamic State…

"The horror of civil war and yearning for normalcy are presented with soulful, harrowing detail by the pseudonymous Samer, a 24-year-old Syrian activist who smuggled his diaries, coded word by coded word, to the BBC. In gripping sequences, Samer describes how life in his home city of Raqqa quickly deteriorated after "liberation" from the Syrian government, as the Islamic State forces imposed their own bloody regime. Samer, a thoughtful and compelling protagonist, writes with both poetic poignancy and blunt honesty of his mother's worry for his safety; the physical destruction of the city and the deterioration of living conditions; and the blighting of Raqqa's soul as whippings, beheading, and stonings became common. The city came to a standstill as people feared being on the street, and most had no money to spend due to the onerous financial burdens imposed by ISIS. Samer eventually fled his home to save his own life, joining the great mass of refugees escaping the war zone. Remarkably, Samer retains some sense of hope by the end. This striking work should be required reading to raise awareness and to remove any shred of doubt that our world is being rocked by a humanitarian crisis of epic proportion."

Raqqa, located in eastern Syria, is one of the most isolated cities in the world owing to the current occupation by the Islamic State (IS). The IS is ruling the civilian population through fear and intimidation. Outside journalists are banned from this area and the penalty for speaking to Western media is death by beheading. The BBC was able to get in contact with the small activist group Al-Sharqiya 24. A member of this group agreed to write a personal diary about his experience using the pseudonym Samer. His book provides a rare look at civilian life inside Raqqa. There are details of the fear tactics employed by IS that include cruel public punishments, with IS recruiting children as young as eight years old to carry them out. Transporting the diaries out of Raqqa was permeated with communication challenges, with frequent days of anxious silence from the activist group. To help protect Samer, his words were encrypted and sent to a third country before being passed on to the BBC. The details of Samer's experience are often times shocking yet provide an important document of this region's history. VERDICT Highly recommended for anyone interested in better understanding the impact of IS in Syria.

Samer (not the author’s real name) is 24 years old. Having recently escaped from Raqqa, he is living in a refugee camp in northern Syria.
Loading...
or
Not Currently Available for Direct Purchase