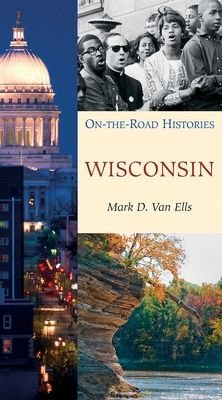 Wisconsin (On the Road Histories)

Starting with the days that wooly mammoths tromped over the landscape, Mark Van Ells brings us on a journey through the fascinating history of the Badger State. Wisconsin remembers the brutal Black Hawk War and the fall of the first Paleo-Indian residents, the booming migration of thousands of Americans, the conflicted German population during and after the two world wars, and the famous Vietnam protests of University of Wisconsin students. Included are recommended museums, state parks, and other attractions, alongside literary excerpts from authors such as Edna Farber and Laura Ingalls Wilder, who give readers a sense of Wisconsin in different eras. Birthplace of such cultural icons as Gene Wilder and Chris Farley, Wisconsin as revealed by Van Ells is a state rich in culture that easily outdoes the stereotypes of harsh winters and sprawling flat American dairy land.

"If you are the type of traveler who likes to explore every aspect of the places you visit, check out this account of Wisconsin's history from its geologic roots to modern times. Learn how the glaciers molded the landforms with kettles, eskers, moraines and dells that grace your drives through the state, and where to find effigy mounds built by early inhabitants more than 1, 200 years ago. Visit such French forts as Ft. LaBaye, Ft. St. Nicolas and Ft. LaPointe, remnants of France's quest for a worldwide empire in the early 17th century. Discover sites of ethnic significance like the Milton House where staunch abolitionist Joseph Goodrich helped runaway slaves in their journey to freedom, and Milwaukee's 16th street Bridge where Father James Groppi and other 1960s-era civil rights activist marched for opening housing rights. The book is conveniently organized by historical era with sidebars highlighting significant points of interest from each time period. Plan an ethnic heritage tour or day trips to Little Norway in Blue Mounds, Norskedalen in Coon Valley, or Old World Wisconsin in Eagle. Or if Wisconsin's maritime, agricultural or beer-brewing customs are more to your liking, you'll find listings of places and events to help chart your travels. For out-of-state travelers, there are nine other books in this series- Alaska, Hawaii, Kentucky, Michigan, Minnesota, Mississippi, New Hampshire, South Carolina and Texas. Each includes a wide-ranging account of the state's history, maps and historical photos, must-see sites, visitor resources and much more."