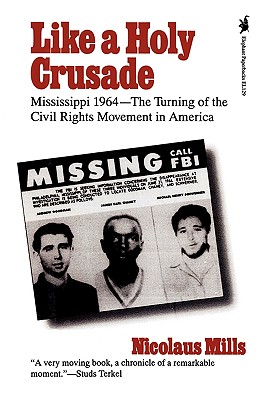 Mississippi 1964 -- The Turning of the Civil Rights Movement in America

The year 1964 produced a watershed in American race relations. In one of the civil rights movement's most dramatic initiatives, thousands of Northern white college students were recruited to come south that summer in an effort to "break" Mississippi and secure voting rights for its black citizens. Nicolaus Mills traces the history of this Summer Project, including its origins and aftermath, and shows in detail how its consequences involved not only great victories but also violence (the murders of Michael Schwerner, James Chaney, and Andrew Goodman, among other events) and disillusion. His persuasive argument is that the noble quest for racial solidarity turned bitter and divisive in practice, climaxed by the Democratic party's rejection of the Mississippi Freedom Democrats at the 1964 national convention. In the rush of black anger that followed, the gains of the summer were forgotten and Black Power was born-and blacks went their separate way in trying to achieve equality in America. Relations between whites and blacks took a crucial turning which continues powerfully to influence our politics and social well-being today.

Nicolaus Mills' other books include Culture in an Age of Money (also published by Ivan R. Dee), The New Journalism, and The Crowd in American Literature. He teaches American Studies at Sarah Lawrence College.
Loading...
or support indie stores by buying on