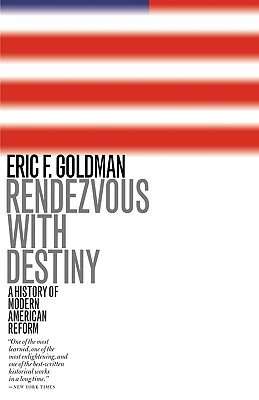 Here, back in print in paperback, is one of the most brilliant and dramatic historical narratives ever written about the American experience. Eric Goldman tells a story of the wise and the shortsighted, the bold and the timid, the generous and the grasping men and women who are the stuff of American reform. He begins in the years after the Civil War, when our tradition of dissent was fueled by industrialization and urbanization. He deals not with theories, alien or native, but with the lives of the dissenters, Populist and Progressive, with their political organizations and schemes, their popular support, the newspapers and newspapermen who controlled them or followed them, the several dramatic flood tides of reform, and the subsequent ebbing. Mr. Goldman has the gift of personal portraiture; by returning directly to men and events, he shows that reform groups have often been patched-up alliances of planners and libertarians, centralizers and decentralizers. The tradition of freedom and the tradition of welfare-both passing as liberal-haphazardly merged in the New Deal, where only Franklin Roosevelt's political skill held them together. They began to revert to their natural opposition during the administration of Harry Truman."One of the most learned, one of the most enlightening, and one of the best-written historical works in a long time."-New York Times. "A continuous narrative....The author stops the action occasionally to insert significant and brilliant sketches of the leading actors...and illuminates his story with anecdotes. He has wit and erudition."-New Yorker.

Eric F. Goldman (1915-1989) was for many years professor of history at Princeton University. From 1963 to 1966 he was special adviser to President Lyndon Johnson. His other books include The Crucial Decade and The Tragedy of Lyndon Johnson.
Loading...
or support indie stores by buying on