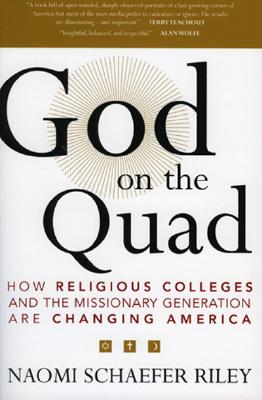 God on the Quad

How Religious Colleges and the Missionary Generation Are Changing America

Religious colleges and universities in the United States are growing at a breakneck pace. By the tens and hundreds of thousands, some of America's brightest and most dedicated teenagers are choosing a different kind of college education, one that promises all the rigor of traditional liberal arts schools but also includes religious instruction from the Good Book and a mandate from above. In this eye-opening report, Naomi Schaefer Riley investigates these schools, interviewing administrators, professors, and students to produce the first comprehensive account of this important trend. With a critical but sympathetic eye, she takes the reader inside the halls of more than a dozen schools that are training grounds for the new missionary generation--Catholic, Protestant, Jewish, Mormon, and even Buddhist. What distinguishes these colleges from their secular counterparts? What do its students think about political activism, feminism, academic freedom, dating, race relations, homosexuality, and religious tolerance? The surprising answers in God on the Quad are a key to understanding the forces at work in post-9/11 America.

Naomi Schaefer Riley is an editor at the Wall Street Journal and has been a contributor to the Boston Globe and the National Review. Her articles have appeared in the New York Times, the Los Angeles Times, the Chronicle of Higher Education, the New Republic, and a great many other magazines. A magna cum laude graduate of Harvard University, Ms. Riley has also been editor of In Character, a journal of the John Templeton Foundation, and an adjunct fellow at the Ethics and Public Policy Center. She lives in Ossining, New York.
Loading...
or
Not Currently Available for Direct Purchase