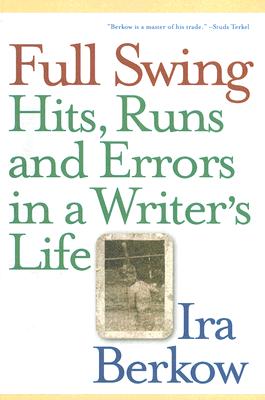 Hits, Runs and Errors in a Writer's Life

It was a long way from the gritty streets of Springfield Avenue on Chicago's West Side, and hawking stockings in the old Maxwell Street marketplace, to a position as sports columnist and feature writer for the New York Times, and a share in the Pulitzer Prize. But Ira Berkow made that improbable journey. In this joyful, moving, and often funny memoir, he describes how he climbed up to become not just a sportswriter but a writer. His early years were not exactly promising. For someone who suffered through poor grades in high school and flunked out of his first crack at college in his first semester, it was a revelation to discover as a junior in college that he had a passion for writing. He pursued it with determination and became one of America's most thoughtful writers on sports, a man interested as much in the people who play the games as in the scores and statistics. His father had not a little to do with forming Mr. Berkow's character and his concern for matters like truth and justice. But there were others who pitched in to help suggest a path for a young man who wasn't always sure what he wanted to do with his life. Like the great sports columnist Red Smith, a mentor who took the time to critique a young writer's efforts; and Red Holzman, the Hall of Fame coach of the New York Knicks, who inspired Mr. Berkow as well as his players. Add E. B. White, Muhammad Ali, Saul Bellow, Mike Royko, Ted Williams, P. G. Wodehouse, Michael Jordan--the cast of characters in Full Swing is as broad as Mr. Berkow's interests and as instructive as a day at training camp. This is a writer's memoir with the warts as well as the wows, and with all the intelligence and charm that readers of Mr. Berkow have grown accustomed to. With 12 black-and-white photographs.

Ira Berkow has been a sports columnist and feature writer for the New York Times for more than twenty years. In 2001 he shared the Pulitzer Prize for National Reporting with his article on "The Minority Quarterback," later published by Ivan R. Dee in a book of the same name. He is the author of more than a dozen books, including the best-sellers Red: A Biography of Red Smith and Maxwell Street: Survival in a Bazaar. He lives in New York City.
Loading...
or
Not Currently Available for Direct Purchase