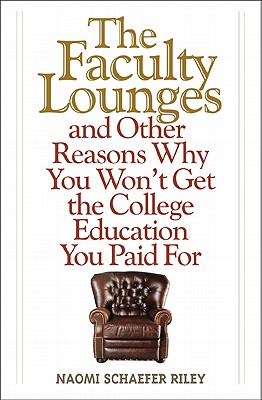 College tuition has risen four times faster than the rate of inflation in the past two decades. While faculties like to blame the rising costs on fancy athletic buildings and bloated administrations, professors are hardly getting the short end of the stick. Spending on instruction has increased twenty-two percent over the past decade at private research universities. Parents and taxpayers shouldn't get overheated about faculty salaries: tenure is where they should concentrate their anger. The jobs-for-life entitlement that comes with an ivory tower position is at the heart of so many problems with higher education today. Veteran journalist Naomi Schaefer Riley, an alumna of one of the country's most expensive and best-endowed schools, explores how tenure has promoted a class system in higher education, leaving contingent faculty who are barely making minimum wage and have no time for students to teach large swaths of the undergraduate population. She shows how the institution of tenure forces junior professors to keep their mouths shut for a decade or more if they disagree with senior faculty about anything from politics to research methods. Lastly, she examines how the institution of tenure--with the job security, mediocre salaries, and low levels of accountability it entails--may be attracting the least innovative and interesting members of our society into teaching.