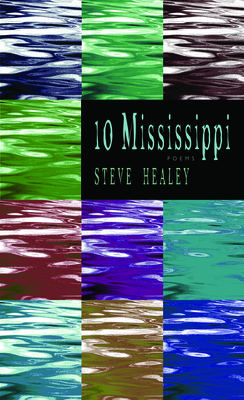 Playful but ominous, 10 Mississippi reads like a game of hide-and-seek set in America's rising floodwaters of text and technology.

Fluid, lively, and referential, 10 Mississippi samples language from many cultural tributaries, performing sequels of celebrated twentieth-century poems, darkly riffing on advertising slogans, tongue twisters, formulaic news reports, and everyone's favorite twenty-six-letter sentence, "The quick brown fox jumps over the lazy dog." Like the proverbial river that is never the same twice, Healey's poems channel the constant transformation of the modern world and embrace the human drama in all its absurd variety.

Despite the national craze for self-expression that poetry has become, it is harder than ever to hear an original voice; but here one is and it’s a doozy. Somehow Steve Healey has figured out a way to get a new sound out of the saxophone of English. Loopy, smart, eyebrow-raising, wiggy, and wildly entertaining belong in the string of modifiers that would try to describe this poet’s amazing voice.”Billy Collins

Steve Healey blends the sharp and the sad in such a moving way in this stunning second book, but it’s at the level of the phrase, and behind that, at the level of the idea, that something really extraordinary is going onHealey’s perspective constantly reinvents itself in striking ways. Though these poems are rangy, Healey nonetheless keeps each one focused on a single theme, which is, in turn, a facet of an elaborate mirror that shows us ourselves, our difficulty, and our promise, refracted through an unremittingly honest worldNot a day ends without the sun totally surrendering.’ Brilliant and deeply moving.”Cole Swensen

This is a powerful book, a great book of urgent knowledge. What art does when it tells us awful things in ways so beautifully made creates a rip in our spirit where deeper and real truth can get in. Healey brings together children’s games, survival tactics, reports of war, reports of violence on the Mississippi River, various instances of hide-and-seek, tensions between hunter and prey, in language tuned up to exquisitely arresting and inevitable wavelengths. I love 10 Mississippi.”Dara Wier

Comically obsessive, meditative in wonderfully askew ways, Healey’s poems signal the melding of a frisky poetics with a weighted consciousness of peril: political, environmental, personal. Explorative of an often hostile, chaotic yet exquisite and wounded world, with a matter-of-fact authority that leads sometimes to the miraculous, sometimes the absurd, sometimes stark truths, 10 Mississippi delights with the buoyancy of invention and scares with the law, the final black / that comes after dusk.’ Reader, prepare for your training wheels to fall off.”Dean Young

"10 Mississippi reveals the sometimes ugly, sometimes beautiful truth of our daily lives. Healey offers us our shining memories of childhood innocence, and then, just as earnestly, the abrupt but enduring realization that life will never again be so easy."Verse Wiconsin

Steve Healey is the author of Earthling. His essays and criticism have appeared in the Writer's Chronicle and Rain Taxi and his poems have appeared in the anthology Legitimate Dangers: American Poets of the New Century and the journals American Poetry Review, Boston Review, jubilat, and others. He received his MFA at University of Massachusetts-Amherst and his PhD at the University of Minnesota. He lives in Minneapolis, and has recently taught at Michigan State University, Macalester College, and the University of Minnesota.
Loading...
or support indie stores by buying on