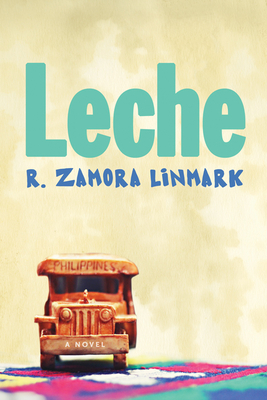 After thirteen years of living in the U.S., Vince returns to his birthplace, the Philippines. As he ventures into the heat and chaos of the city, he encounters a motley cast of characters, including a renegade nun, a political film director, arrogant hustlers, and the country's spotlight-driven First Daughter. Haunted by his childhood memories and a troubled family history, Vince unravels the turmoil, beauty, and despair of a life caught between a fractured past and a precarious future.

Witty and mesmerizing, this novel explores the complex colonial and cultural history of the Philippines and the paradoxes inherent in the search for both personal and national identities.

R. Zamora Linmark is the author of the novel Rolling the R's (Kaya Press) and two poetry collections, Prime Time Apparitions and The Evolution of a Sigh (Hanging Loose Press). Linmark splits his time between Manila and Honolulu.

As quirky and funny as its oddball characters, Linmark’s latest is a unique, colorful portrait of cross-cultural experience and a view into the complexities of modern-day Philippines through the prism of an ex-pat’s self-discovery and quasi-homecoming.”Publishers Weekly, starred review

[A]s cheeky a novel as you’ll encounter. . . . the book’s nonstop energy and nonstop attitude are addictive. And in Vince you won’t find a less predictable tour guide. A lively satiric return to early 90s Manila, seen from both sides of the Filipino American divide.”Kirkus Reviews

Linmark delivers a harrowing tale of love, family, and cultural bewilderment, a sardonically funny and vibrant novel about one man’s journey to his past. . . . Linmark’s novel reads like a bittersweet love letter to a vast and perplexing nation. This is a story of heritage, sexuality, and self-discovery that is as riveting as its locale is complex.”Booklist

Linmark offers both a meditation on what it means to be Filipino and an exuberant, affectionate, irreverent love letter to the city of Manila from one of its own. . . . Linmark, who like Vince has lived in both Manila and Hawaii, develops a lively and engaging narrative voice as he skillfully juxtaposes these two very different cultures. . . . This is a jaunty, kaleidoscopic novel that amusingly chronicles the many challenges Vince faces moving between cultures. Recommended for readers of lighthearted literary fiction.”Library Journal

At times uproariously funny, . . . Linmark weaves cultural and historical research into his story and employs a nonlinear structure to the narrative, including jumps in time, lists of Philippines travel tips,” and postcards to and from Hawaii. . . . Above all, Linmark’s writing is literary: heightened, emotional and beautifully crafted. Linmark began as a poet, and pays close attention to rhythm, economy and word choice, even in such a rollicking, gutsy story. It is a story that many people can relate to, but one that can only be told by a writer of his caliber.”Honolulu Star Advertiser

The story examines culture-shock, modern-day gay life and the way things were in the early ’90s, all with Linmark’s sense of funny. Only this time, the narrative is in third person. Embedded within the book is a certain playfulness. Interspersed are Tourist Tips” for Manila, as well as postcards with photos that Vince writes to his friends back home. In short, Leche is all we’ve anticipated from Linmark.”Honolulu Weekly

This time around, Linmark uses his trademark po-mo fragmentation for surface texture; it compromises the novel's picaresque forward motion not a whit. This is a languageand a Manila that should be familiar to readers of the Asian American canon, and Leche feels like the long-awaited completion of something we didn't know was incomplete.”Hyphen

"R. Zamora Linmark writes with the incandescent irreverence of a papal heretic, with the poetic and chaotic sense that only the Philippines can bestow, with the language of a sainted seer all held together with an elegant craft and a graceful style. Leche is a beautiful book." Chris Abani, author of GraceLand and Virgin of Flames

"Leche is a combustible comedy, a nightmare, a fever dream that with humor and horror somehow captures the fractured Philippine identity. Eye opening, hilarious, and relentlessly seductive, Zamora Linmark holds the reader until the very last page." Sabina Murray, author of Forgery and The Caprices