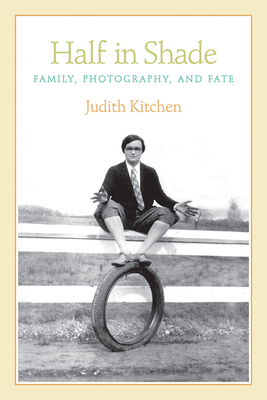 "Judith Kitchen has written a book that is at once clear and accessible and at the same time insistently complex. Her effortlessly constructed hybrids make Half in Shade part memoir, part speculation, part essay, a demonstration of the interactive art of seeing, and finally for me, a beautifully sustained meditation. It is at that meditative level that the book's potent, unsentimental emotive power gathers." --Stuart Dybek

When Judith Kitchen discovered boxes of family photos in her mother's closet, it sparked curiosity and speculation. Piecing together her memories with the physical evidence in the photos, Kitchen explores the gray areas between the present and the past, family and self, certainty and uncertainty. The result is a lyrical, ennobling anatomy of a heritage, family, mother-daughter relationships, and the recovery from an illness that captures with precision the forces of the heart and mind when none of us knows what lies beyond the moment, outside the frame.

Judith Kitchen is the award-winning author of several works of fiction, nonfiction, and poetry. Her work has won the Lillian Fairchild Award, a Pushcart Prize, and the S. Mariella Gable Fiction Prize. She has served as judge for the AWP Nonfiction Award, the Pushcart Prize in poetry, the Oregon Book Award, and the Bush Foundation fellowships, among others. The recipient of a National Endowment for the Arts fellowship, Kitchen lives in Port Townsend, Washington, and serves on the faculty and as codirector of the Rainier Writing Workshop at Pacific Lutheran University.


Praise For Half in Shade: Family, Photography, and Fate…

[Half in Shade] rewards a leisurely reading, with not only, as Kitchen promises, patterns of American immigration and opportunities,” but an experience that may open the eyes to the treasure chest of American experience found among those stepchildren of the artsthe snapshots. Kitchen’s book lets you know what a keen eye coupled with an alert and sensitive intelligence can see.” Publishers Weekly

"Half in Shade is illustrated with dozens of the family photographs Kitchen found in that 'haphazard collection of boxes and albums.' Each photo prompts a lyrical reflection on its place in her family history and how she herself fits into the picture, so to speak."David Abrams, The Quivering Pen

"[E]ach of the lyric tidbits develops before the reader as if with toners and fixers and gelatinsilver in a darkroom, the process yielding startling and wondrous results."NewPages

"Judith Kitchen is a gifted writer of immense humanity, grace, and depth. Travel with her, trusting where she takes you." Naomi Shihab Nye

"Half in Shade is mysterious and brave, written with wit, humor, stabbing insight, and in prose that reverberates long after you turn the last page." Dinah Lenney

"Half in Shade is one of those rare, hypnotically enjoyable books that can be stretched out over many long, lazy afternoons or read in one sitting. Kitchen writes of photographs that 'there is a mystery in the still moment. The very black-and-white of it. It serves as entry into another time, another place.' The same could be said of her words." ForeWard

"Half in Shade is the workdiligent and curiousof an innocent of sorts, a daughter, mother, and grandmother mapping family stories and myths using grainy images as her guide."No Such Thing As Was

"Behind the beautiful language Kitchen employs and the poignant moments she unearths, it's the theme of life's instability that resonates most. . . . Using her imaginationand oursKitchen creates a testament to the veracity of art: sometimes the fiction is more real than the facts. More importantly, sometimes all the spectator needs to connect the dots is that uncanny sense of familiarity."The Brooklyn Rail

"Kitchen's ruminations linger long after Half in Shade is finished, leaving readers to question how much we really know about the people who become our parents." Shelf Awareness

"Half in Shade [is] well worth the read. Together with the photographs, it offers an entertaining, quirky, and sometimes profound trip down memory laneeven if the lane is not your own." TriQuarterly Review

Judith Kitchen is the author of several works of fiction, nonfiction, and poetry. Her work has won the Lillian Fairchild Award, two Pushcart Prizes, and the S. Mariella Gable Award. She has served as judge for the AWP Nonfiction Award, the Pushcart Prize in poetry, the Oregon Book Award, and the Bush Foundation fellowships, among others. The recipient of a National Endowment for the Arts fellowship, Kitchen lives in Port Townsend, Washington, and serves on the faculty and as codirector of the Rainier Writing Workshop at Pacific Lutheran University.
Loading...
or support indie stores by buying on