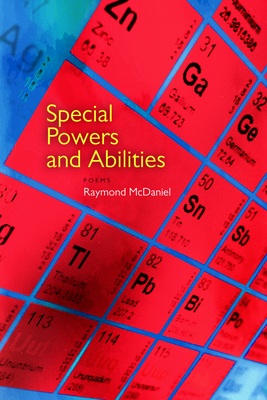 "McDaniel's language trains every particle of your attention on the surface and what stirs beneath."--C.D. Wright

Inspired by the comic series The Legion of Super-Heroes, Raymond McDaniel's poems morph superheroes into religious and mythological narratives. Using a range of traditional forms--versets, kennings, and sonnets--his poems consider the history of how we look at the future and take on an almost Talmudic complexity.

Raymond McDaniel is the author of Saltwater Empire and Murder (a violet), a National Poetry Series selection. Born in Florida, McDaniel now lives in Ann Arbor, Michigan, teaches at the University of Michigan, and writes for The Constant Critic.


Praise For Special Powers and Abilities…

"There's nothing like this stellarand also interstellarcollection. . . . These poems are like their comic book sources in many ways, all of them smart and most of them touching, but in one way most of all: pick it up and you won't want to put it down."Stephen Burt

"In Special Powers and Abilities, Raymond McDaniel takes as his subject the perpetual allure of adolescence, where, like Ben-Day dots, emotions are simple, modular, primary-colored. . . .Out of these lurid tints and all-caps dialoguethe crude exuberance of youthMcDaniel constructs a subtle and haunting meditation on nostalgia, stitched of silk & almost oblivion” and the world to which you cannot return” is a universe in which unitards are donned for everyday wear and foil” can be used as a verb. To be alien” here is not to hail from an exotic planet, but instead to be stricken by adult self-consciousness: a mind, worn smooth by friction.”Monica Youn, National Book Award poetry finalist for Igntatz

"McDaniel doesn’t so much capture the voice of superheroes as he employs his special ability to render thememotionally, psychologicallywhich is a super power in itself. These poems are at once sublime and imaginative, earthy and other worldly, philosophical and sensible. The future of myth and fable lies between these pages, a future we once believed could be good, because/ once we believed a future could be.' Read these poems and believe again."A. Van Jordan

Raymond McDaniel is the author of Saltwater Empire and Murder (a violet), a National Poetry Series selection. His writing appears in many magazines and in the anthology American Poets in the 21st Century. Born in Florida, McDaniel now lives in Ann Arbor, teaches at the University of Michigan, and writes for The Constant Critic.
Loading...
or
Not Currently Available for Direct Purchase